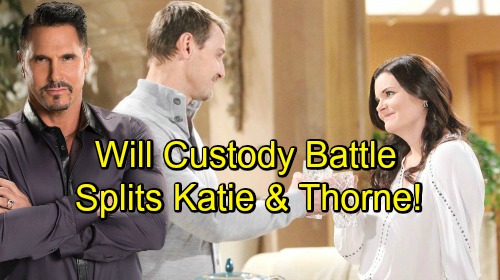 The Bold and the Beautiful spoilers tease that Katie (Heather Tom) and Thorne’s (Ingo Rademacher) relationship may soon be on shaky ground. “Thatie” have enjoyed a carefree, fun summer fling, but lately things have taken a more serious turn. The issue of Will (Finnegan George) has come front and center in their relationship.

Thorne and Will get along just fine, so that’s not a problem. But what’s turning into a problem with lightening speed is Bill’s (Don Diamont) involvement (or lack thereof) in Will’s life. Bill’s been an absent dad for most of the summer as he’s been obsessed with Steffy (Jacqueline MacInnes Wood) and his all-important business dealings.

But now, Bill is back in the picture and wants to put forth the effort to be the kind of dad that Will needs. The only problem is that this is Bill, and he doesn’t really know how to be a dad to a young kid. To Bill, fatherhood has always been about building an empire to pass on to his children, not about actually connecting with his kids.

And then there’s Thorne, who is a more hands-on type of role model for Will. Thorne sees that Will is rejecting Bill, but instead of stepping in to help, B&B spoilers say that Thorne’s going to push Katie to seek full legal custody of Will. Katie will have mixed feelings about the idea, but Thorne’s going to remain keen on the idea of full custody.

If Katie goes ahead with the custody suit, then of course Bill is going to hit back hard. B&B spoilers say that he’ll threaten to play dirty and use Katie’s past against her and knowing Bill, he won’t hesitate to follow through with that threat. If it all goes wrong, Katie could blame Thorne for planting the seed of full custody in her head in the first place.

At any rate, nobody is going to be in a good place if Katie does seek full custody of Will. And even if she doesn’t, Thorne is still causing her considerable grief just by pressuring her to start a fight with Bill. It just may be more than Thatie can withstand, regardless of what Katie decides to do.

Do you think Katie will succumb to Thorne’s pressure and go for full custody after all? And what will it mean for Thatie? Stay tuned to the CBS soap and don’t forget to check CDL often for the latest Bold and the Beautiful spoilers, updates, and news.