BY Heather Hughes on September 14, 2018 | Comments: one comment
Related : Soap Opera, Spoiler, Television, The Bold and the Beautiful 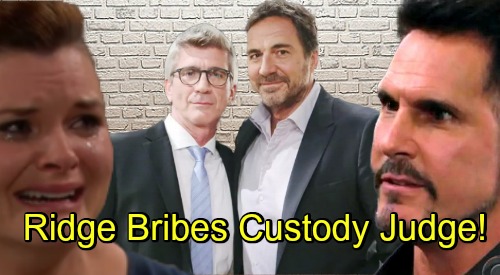 The Bold and the Beautiful (B&B) spoilers tease that Bill’s (Don Diamont) resolve will grow stronger. The harder Katie (Heather Tom) digs her heels in on this custody issue, the more Bill will want to win. There’s obviously a lot at stake for him here. Bill has always had complicated relationships with Wyatt (Darin Brooks) and Liam (Scott Clifton). He’s still trying to repair all the damage he’s caused.

With Will (Finnegan George), Bill has a chance at a fresh start. Missing a few playdates is no big deal compared to pursuing one son’s love interest and using another as a pawn. Will was upset about his dad bailing on him, but it wouldn’t have been hard for Bill to fix things.

After all, Bill’s got plenty of money. Just buy the kid some expensive toys and take him to some ballgames. Will would’ve easily forgiven Bill, especially since all he really wants is his father’s undivided attention. Bill wants to be there for Will, but Katie will continue to stand in the way. It’ll leave Bill enraged and fired up about pulling off a courtroom victory.

Bill’s partnership with Brooke (Katherine Kelly Lang) won’t really help much in the end. It’ll only serve to bring these exes closer, which is probably the point. B&B has to find strategies to make love triangles happen! They could find another one when Ridge (Thorsten Kaye) crosses the line. He hates Bill and fully intends on supporting Katie, so don’t be surprised when he plays dirty to assist her.

During the week of September 17-21, The Bold and the Beautiful spoilers say Bill and Ridge will have a showdown. It’ll drive them both down risky paths, but Ridge’s might prove to be the most shocking. He’ll decide it’s time to schedule an important meeting. Ridge will make an appointment with the judge presiding over Will’s custody case, so it sounds like he knows the guy and can pull some strings.

Before he moves forward, Judge McMullen (Joe Lando) will listen carefully to what Ridge has to say. Will Ridge influence this battle’s outcome? The Bold and the Beautiful spoilers state that Bill’s sure to explode over Ridge’s sneaky move. We’ll give you updates as other news comes in. Stick with B&B and don’t forget to check CDL often for the latest Bold and the Beautiful spoilers, updates and news.