The Bold and the Beautiful Spoilers: Ridge Pushes Bill Off Balcony, Puts Him in a Coma – Detective Sanchez Grills Ridge and Thorne

BY Heather Hughes on October 17, 2018 | Comments: one comment
Related : Soap Opera, Spoiler, Television, The Bold and the Beautiful 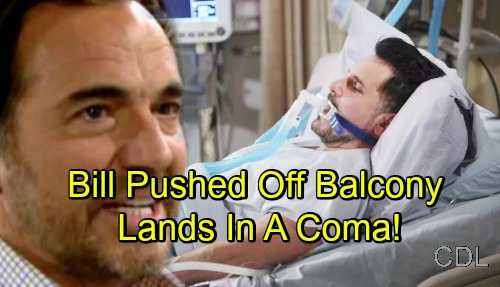 The Bold and the Beautiful (B&B) spoilers tease that Ridge (Thorsten Kaye) and Thorne (Ingo Rademacher) will make a huge mistake. They’ll both be boiling mad over Bill (Don Diamont), so they’ll decide to team up for a confrontation. It’s not a good idea to outnumber Bill in a fight, especially when they’re so enraged. When tempers flare, things can easily get out of hand.

Unfortunately, that’s exactly what’ll happen once this showdown kicks off. The Bold and the Beautiful spoilers say insults will be hurled and punches will fly. It won’t be long until this turns into a full-blown brawl. B&B fans can expect each of these men to unleash their fury in a big way. Sadly, Bill will be the one who takes the hardest hit. This scuffle will quickly turn into a life-threatening situation!

The Bold and the Beautiful spoilers state that Bill will take a shocking tumble. It looks like he’ll fall off a balcony after being shoved by Ridge, Thorne or both –  B&B buzz says Ridge will be primarily responsible. The Forrester brothers will have to call 911 and get some paramedics on the scene ASAP. Of course, they’ll probably be most concerned about their own fates. Detective Sanchez (Jeremy Ray Valdez) is going to have plenty of questions for them soon.

Thorne and Ridge will have to get their story straight. They’ll naturally want to frame this just right and make it seem like Bill was the monster. That could be tough since they’ll be the ones who started the fight and Bill falls and is comatose! Nevertheless, Ridge and Thorne will hope their version of events will stick. That should be the case for a while thanks to Bill’s terrible condition.

The Bold and the Beautiful spoilers say Bill will land in a coma. After being rushed to the hospital, he’ll most likely need emergency surgery. After that, the doctors will just urge Bill’s loved ones to watch and wait. They’ll hope Bill can bounce back from this, but they may not know for sure.

Wyatt (Darin Brooks) will be upset about how all this went down. He’ll confront Ridge and Thorne about their obsessive need for revenge. Liam (Scott Clifton) should arrive to chime in eventually. Brooke (Katherine Kelly Lang) and Katie (Heather Tom) will have a thing or two to say as well.

It sounds like this incident will leave several relationships more strained than ever. We’ll give you updates as other B&B news comes in. Stay tuned to the CBS soap and don’t forget to check CDL often for the latest Bold and the Beautiful spoilers, updates and news.