BY hellodrdavis on October 16, 2018 | Comments: 2 comments
Related : Soap Opera, Spoiler, Television, The Bold and the Beautiful 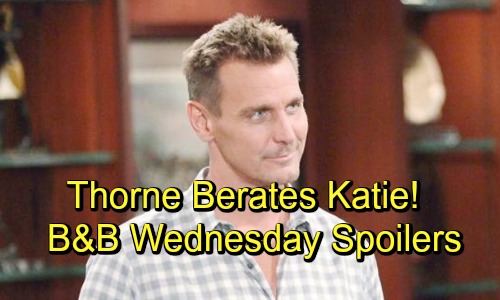 The Bold and the Beautiful spoilers for Wednesday, October 17, tease that Brooke (Katherine Kelly Lang) will get more grief for her collusion and kisses with Bill (Don Diamont). She and Ridge (Thorsten Kaye) have worked through their issues and patched things up for the time being, but now Brooke will have to face someone else about what she’s done…her daughter.

Hope (Annika Noelle) has just learned about the kiss the Steffy (Jacqueline MacInnes Wood) witnessed in Ridge’s office. Hope was stunned by the revelation, so she’ll head straight to Brooke to find out what’s going on. Brooke will fill Hope in on how she and Bill were meeting privately about Katie’s (Heather Tom) custody case and how Bill kissed her.

Chances are, Hope’s not going to be too understanding about all of this, especially since Brooke has portrayed herself as the beacon of morality over the past few months. It will probably take a while for Hope to wrap her head around the fact that her mother was so recently canoodling with Bill

Meanwhile, on the new B&B episode on Wednesday, October 17, Thorne (Ingo Rademacher) will want some answers from Katie. He’ll learn that Katie’s no longer holding Bill to the terms of the sole custody arrangement that she won in court, and he’ll be puzzled. He thought that he and Katie were on the same page about needing to keep Bill on a short leash where Will (Finnegan George) is concerned.

Of course, Katie’s real motivation for reverting back to shared custody is guilt. She feels terrible that Ridge influenced the Judge McMullen (Joe Lando) to find in her favor and against Bill, and in her mind, she’s righting a wrong by offering Bill more access to Will. Plus, she sees the positive changes in Bill as a parent and she wants to nurture that.

But will Katie share her reasoning with Thorne? Chances are, she’d like to be honest with her new husband, but she promised Brooke that she wouldn’t tell anyone that Ridge improperly influenced the judge. Thorne’s pretty persistent, though, and he just might get the truth out of her.