The Bold and the Beautiful Spoilers: Steffy Collapsing Mentally – Liam Remains In the Dark

BY Sean O'Brien on December 7, 2017 | Comments: one comment
Related : Soap Opera, Spoiler, Television, The Bold and the Beautiful 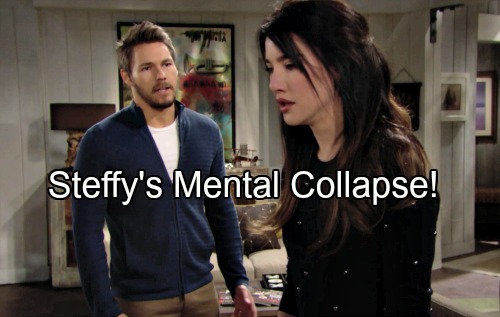 The Bold and the Beautiful spoilers tease that Steffy (Jacqueline MacInnes Wood) is suffering terribly after impulsively seeking refuge with Liam’s (Scott Clifton) father. The cascading impact of what transpired on that fateful night, when her husband dropped the Sally (Courtney Hope) admission her soul, appears too infinite to measure. Whether she’s able to corral her emotions, or will need to seek professional help is now the question.

Those personalities who’ve never made a mistake have been trolling Steffy, reveling in her misery. But not this scribe, or anyone who believes in earned redemption.

Oh, don’t get this digital pen wrong. Liam deserves to be as angry as he wants after the Dollar Still reveal takes place, however that occurs. Steffy’s husband may need plenty of time and space to come to terms what what transpired. And Steffy will only have herself and Bill (Don Diamont) to blame if Liam requests a divorce at any point in this anticipated response process.

Bill should have never taken advantage of a woman, who was his stepdaughter no less, when she was in an incredibly vulnerable state of mind. He not only committed that sin, but then was was ready to leave the county with her, as Bill expected Steffy to tell Liam all that happened.

So there was Liam, the guy who kissed Sally when both B&B characters were adorned with realistic sooty makeup and thought they were mere moments from death. In retrospect their choice was of the moment and really didn’t mean much. It’s known that Sally is into Liam, but he absolutely does not love her and never would have locked lips if that particular circumstance hadn’t presented itself.

Liam and Sally were equally responsible for putting their own lives in danger. They surely paid a price, learned an unforgettable lesson and are forgiven. Liam’s subsequent gut-purge to Sally was admirable, even though this scribe thought he was a goof at the time for doing so. Even a digital genius gets it wrong sometimes and he’s humble enough to admit it, this time. (Wink.) 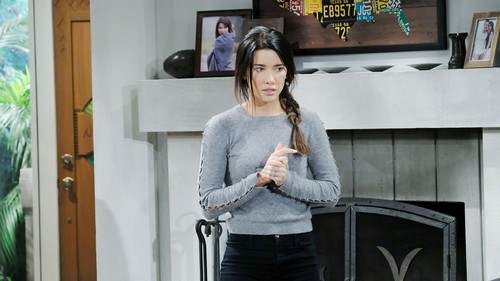 Steffy hasn’t been able to mentally digest what she did, which proved again that she does love her husband. That’s why she was shocked and disgusted with herself after waking up aside of Bill in the Forrester guest house.

Carter (Lawrence Saint-Victor) handled Liam’s warm-hearted gesture shortly thereafter, as Leffy renewed their vows. At that point it seemed that Steffy was going to get past what happened. But Liam’s question about where she went the night of their argument reopened the hole in her conscience. How, or if she’ll be able to heal remains anyone’s guess.