BY Sean O'Brien on August 13, 2018 | Comments: one comment
Related : Soap Opera, Spoiler, Television, The Bold and the Beautiful 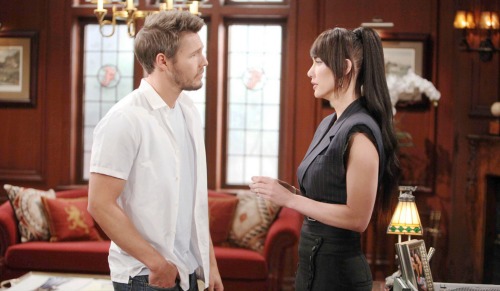 Steffy (Jacqueline MacInnes Wood) saw Lope’s impromptu engagement ceremony while standing in the doorway of her own office. Even though she’s given her blessing to this intended nuptial, the view still upset her. The Bold and the Beautiful spoilers tease that Ridge is not done and will have a hard time accepting Lope.

Thankfully Steffy and Liam later had a heart-to-heart. Steam was terffic, at times. But the Still incident and all subsequent drama that Bill (Don Diamont) intentionally caused for his son and the woman he was obsessed with, until his recent ephiphany, proved to be too much.

Being soap it’s always possible that Steam reconciles. But that opportunity feels like it might be at least a year away, if even possible by next summer.

In a very touching scene, Liam told Steffy that they would experience Kelly become a toddler, go to preschool, have her first kiss, get married (he did say that, right?), and have children of her own someday, thereby making them grandparents. As Clifton’s finally maturing character stated, they aren’t a traditional family, but are still family. That’s right in the sense that all who understand love know.

B&B needed to push into new plot territory. Never feeling to this scribe like a rut, the right amount of time was spent on the created rectangle, meaning Steffy, Liam, Bill, and Hope. Arrving in fresh storyline space, viewers are just beginning to see what options are now open.

Steffy will surely have zero problem getting a man, if she wants one. Whether he’s a quality guy is another issue. And to be fair, she has at least as much relationship baggage as any current male character, dude who could return to Los Angeles, or a man who simply could be created for Steffy.

The Bold and the Beautiful spoilers suggest that Steffy’s new man has been hired and will prove to make Liam and Bill very jealous!

Ridge naturally wants the best for his daughter. He served as Liam’s sole, legitimate father figure and has already moved into grandfather-protector position. Steffy told her dad how important his presence within the last year has been to her and will surely rely on his ongoing guidance as she strives to become a seasoned parent.

As for Lope, their personalities are a match. Hope and Liam’s baby should be born in the early part of 2019, if a healthy baby is what TPTB plan. By that time all that’s happened through August 2018 will be be part of receding history.

Here’s hoping that all textured characters continue to be written as strongly as they have been through this highly-engaging arc. B&B is zooming on all cylinders, easily ranking near, or at the top of daytime.