BY Marcy Cohen on May 15, 2018 | Comments: 2 comments
Related : Soap Opera, Spoiler, Television, The Bold and the Beautiful 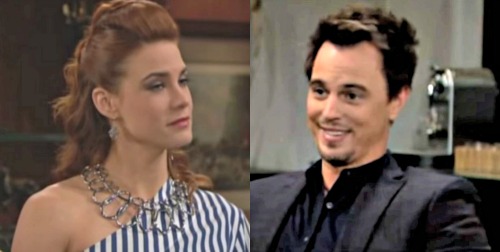 The Bold and the Beautiful (B&B) spoilers tease that Sally’s (Courtney Hope) headed back to the CBS soap soon. How will the lively redhead shake things up? There are several ways for Sally to get back in the drama, but some are more likely than others. Let’s consider how Sally’s return might play out.

Sally had feelings for Liam not too long ago, so B&B fans are growing concerned on social media. Liam already has Hope (Annika Noelle) and Steffy (Jacqueline MacInnes Wood) fighting over him. Does he really need another love interest to further complicate the situation?

It’s not like Liam and Sally had off-the-charts chemistry anyway. Their scenes together were fine, but it’s clear that this wouldn’t be a memorable romance. Besides, many Bold and the Beautiful viewers would like to see a little less Liam on the CBS soap. He’s an intriguing character at times, but you can definitely have too much of a good thing.

In other words, it seems ridiculous to give Liam three women who are obsessed with him. B&B needs to spread some of that love around! Sally would be a much better fit for another Spencer anyway. Since trouble could be brewing for Katie (Heather Tom) and Wyatt (Darin Brooks), perhaps Liam’s brother will find himself single and ready to mingle.

The Bold and the Beautiful spoilers say Katie will convince Wyatt to keep quiet about Bill’s (Don Diamont) scheme. That means she’ll push him into keeping up the lie, which isn’t going to go over well with the manipulated love triangle. Liam, Hope and Steffy will be livid when they discover Wyatt hid the truth.

Once Wyatt’s on the hot seat, he may lash out at Katie. Wyatt might argue that he wanted to come clean from the get-go. He may blame Katie for the mess and spark a breakup. Whether Wyatt dumps Katie or gets dumped himself, “Watie’s” future could indeed be in jeopardy.

Meanwhile, Sally could return bitter and brokenhearted. Perhaps Thomas (Pierson Fode) will decide to forgive Caroline (Linsey Godfrey) after all. Sally and Wyatt could be drawn to each other as they cope with the pain. They’d probably be a hot couple, so it’s worth putting them together and giving this pairing a shot.

That’d leave Katie for Thorne (Ingo Rademacher), which B&B set up long ago. This is the perfect time to try something new all around. We’ll give you updates as other news comes in. Stay tuned to the CBS soap and don’t forget to check CDL often for the latest Bold and the Beautiful spoilers, updates, and news.