The Bold and the Beautiful Spoilers: Scott Clifton Warns Steam Fans of Breakup Disaster – Teases ‘It Ain’t Over Till It’s Over’

BY Marcy Cohen on June 8, 2018 | Comments: one comment
Related : Soap Opera, Spoiler, Television, The Bold and the Beautiful 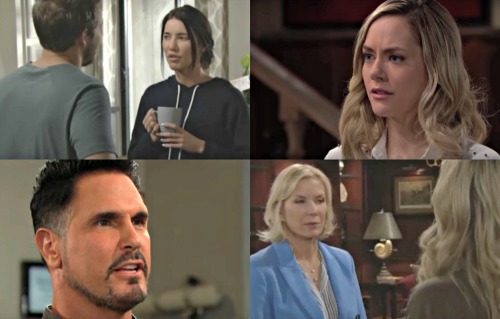 The Bold and the Beautiful (B&B) spoilers revealed Steffy (Jacqueline MacInnes Wood) and Liam’s (Scott Clifton) bliss may be short-lived. Now that they’ve got little Kelly in their lives, these proud parents are on cloud nine. They’ll be even happier after Liam proposes and Steffy accepts.

However, it sounds like “Steam” fans should prepare for the worst – at least that’s what Scott Clifton thinks. In the new issue of Soap Opera Digest, Clifton offered some juicy hints about the upcoming drama. He wanted to be sure everyone’s ready for the bumpy ride ahead.

Is Steffy and Liam’s future truly solid? Clifton suggested that he couldn’t give viewers the whole story. You’ll have to tune in for that! Nevertheless, Clifton was willing to admit that trouble’s brewing. “The one thing I can say is, it ain’t over till it’s over,” Clifton teased. “That’s the thing about a soap opera, because now that all the signs are pointing toward Steffy, be very wary.”

Uh-oh. That certainly doesn’t sound like good news for this new mom and dad. The Bold and the Beautiful spoilers say some surprising obstacles are coming up. Liam and Steffy’s bond will inevitably be tested, so that should bring some gripping material.

B&B fans know Liam tends to bail when the going gets tough. He’s also a notorious waffler, so Hope (Annika Noelle) may remain a backup option. That’s especially true if she happens to be pregnant. Of course, scheming Bill (Don Diamont) and even meddling Brooke (Katherine Kelly Lang) could present problems. There are just so many ways this reunion could go horribly wrong.

Clifton indicated that the story could zig when you expect it to zag. The Bold and the Beautiful spoilers state that some big twists are looming. “Once you think you know what’s going to happen, that’s when you need to be cautious,” Clifton warned. “The fact that all the evidence is pointing toward Steffy should make you, the viewer, very skeptical as to where he and Steffy will actually end up.”

Does Hope still have a shot with Liam? Will “Steam” weather the storm or fall apart all over again? We’ll give you updates as other B&B details emerge. Stick with the CBS soap and don’t forget to check CDL often for the latest Bold and the Beautiful spoilers, updates and news.