The Bold and the Beautiful Spoilers: Steam Trio Prepared To Beat Bill – Kelly’s a Powerful Ally 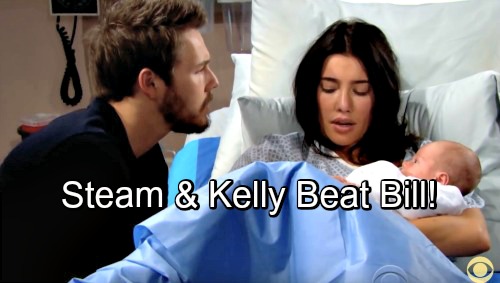 The Bold and the Beautiful spoilers tease that Steffy (Jacqueline MacInnes Wood), Liam (Scott Clifton), and baby Kelly are in a strong position. Together they are a family. Plus, they can beat Dollar Bill (Don Diamont).

Steam became a trio the instant Kelly was conceived. Yes, that little girl didn’t represent a rock, a piece of paper, or scissors. Instead, she, like all humans and other creatures became a living being. Science fully rebukes those who believe their emotional opinions are more important than the facts about this infinite issue. All reasonable minds who were ever born agree. But is Bill reasonable?

It is a fact that Liam is Kelly’s father. Unless soapy magic changes the paternity, Bill won’t be able to work around the reality that the woman he claims to love had his son’s baby, not his own.

Only abnormal minds would rate Bill’s abhorrent actions as good. He targeted his son’s wife during a very vulnerable day in her life. Bill carried his latent feelings for Steffy to the Forrester guest house on that fated evening last fall.

Later, upon reflection, Steffy realized that she shouldn’t have allowed Liam’s honest, good faith, admission about kissing Sally (Courtney Hope) to have affected her as it did. Steffy’s give-in to emotions swayed her logic, which resulted in the ill-fated encounter with Bill at her grandfather’s secondary property.

Separately, B&B has never answered the question as to how Bill knew Steffy was at the guest house. That plot point remains unbelievable and needs to be explained, especially if a paternity question arises.

Assuming that Liam is Kelly’s father, Bill just lost a significant amount of power. All is in the open regarding the misguided encounter between Bill and Steffy. So Liam can’t be manipulated by withheld information.

Assuming that Liam is Kelly’s father, Steffy may be regaining her traditional family. It’s what she’s been desiring since Liam left her. Now that Kelly has been born the power of her presence has already impacted Liam’s emotions like nothing else ever has. However, in this instance, his logic is being righted by feelings.

Family obligations aren’t easy once they’re chosen and in place. Liam has an obligation to his daughter. Modern minds would debate whether he has an obligation to her mother. Legalists would cite the recent annulment in favor of living separate lives, but wouldn’t quote morality. To them, that’s something to be worked around, which brings us back to Bill.

Ridge (Thorsten Kaye) has been right all along. Liam can defeat his father by remaining with Steffy and now, caring for Kelly as well. But the Steam trio should remain intact for a far better reason than vanquishing Bill. Their love and support for each other, which would include remarriage, would represent true victory.