BY hellodrdavis on October 8, 2018 | Comments: 2 comments
Related : Soap Opera, Spoiler, Television, The Bold and the Beautiful 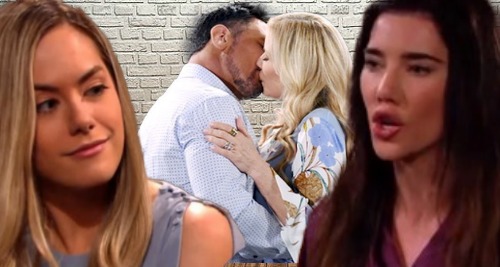 The Bold and the Beautiful spoilers tease that Steffy (Jacqueline MacInnes Wood) will reel after she sees Brooke (Katherine Kelly Lang) and Bill (Don Diamont) kissing. It will be an event that causes a chain reaction. Steffy will tell Ridge (Thorsten Kaye) about the incident, and all hell will break loose.

B&B spoilers indicate that Steffy won’t hold back from slamming Brooke in front of Hope. Steffy may point out that Brooke had a lot of nerve calling Steffy out for cheating on Liam (Scott Clifton) in light of her own recent actions. Steffy doesn’t like it that Brooke always acts so moral and upstanding and judges Steffy for her actions when she’s clearly capable of the same behavior.

Hope will fight back, though, and have her mom’s back. B&B spoilers say that Hope will defend Brooke to Steffy. Hope might argue that Brooke simply made a one-time mistake, or that she didn’t instigate the kiss. Perhaps Hope will point out that Brooke and Bill simply kissed, and that it’s not at all the same as sleeping together, like Bill and Steffy did.

And just like that, the war between Steffy and Hope will be back on. Steffy will feel judged by Hope once again and she’ll feel like Hope is just making excuses for her mother, and Hope will feel that Steffy is just standing in solidarity with Ridge like she always does.

If Brooke and Bill’s marriage goes down, the chances of Hope and Steffy getting on civil terms are probably slim. Will they ever see eye to eye on anything again? Stay tuned to the CBS soap and don’t forget to check CDL often for the latest Bold and the Beautiful spoilers, updates, and news.