BY Kinsley Goldman on December 4, 2018 | Comments: one comment
Related : Soap Opera, Spoiler, Television, The Bold and the Beautiful 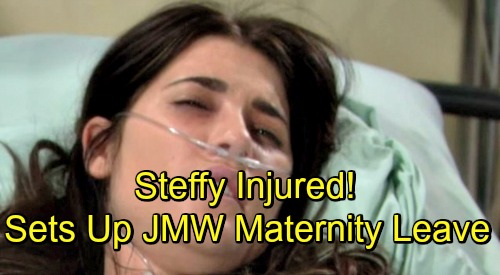 The Bold and the Beautiful (B&B) spoilers tease that a dark twist could be brewing on the CBS soap. The show’s certainly handing out plenty of clues about the danger. They may even be giving us a hint regarding the potential victim if we look close enough. Let’s consider how B&B’s next shocker might play out.

For starters, it’s clear that Taylor’s (Hunter Tylo) not doing well at all. She’s all wound up and destined to cause more trouble. Several major characters fear that Taylor poses a serious threat, so it seems likely that she’ll indeed spark peril. It’s just a matter of how, when and which characters will be affected.

Of course, Hope (Annika Noelle) is a good candidate to get hurt. She’s expecting a baby girl and many B&B fans believe this kid won’t survive. It would make sense if Taylor inadvertently put Hope and her unborn child in harm’s way. That’s especially true since Liam’s (Scott Clifton) been so concerned about Kelly and the daughter he’ll soon add to his family.

However, there’s another option that could tie in with Hope’s potential baby drama. It makes just as much sense if you think about it. Steffy (Jacqueline MacInnes Wood) is determined to protect Taylor, even when so many others are standing firm against her. She’s in for a rude awakening when inevitably Taylor resorts to violence again.

What if Taylor goes after Hope or Brooke (Katherine Kelly Lang) and Steffy decides to intervene? She could end up getting shot or shoved from a great height in the process. Those seem like The Bold and the Beautiful’s favorite paths to the hospital. It’d be interesting to see Taylor cope with accidentally hurting her own daughter.

This would also set up an easy exit for Jacqueline MacInnes Wood. She’s pregnant in real life, so her maternity leave is coming up. Why not put Steffy in a coma to explain her absence? That would give Wood’s castmates some gripping material to play while she’s out of the picture.

As for Hope, the stress of it all could still send her into early labor and bring on a disastrous delivery. One way or another, Hope’s baby is probably doomed. The Bold and the Beautiful spoilers hint that Liam and Hope have a tough road ahead of them, so this could kick off their nightmare. In fact, Liam could be dealing with two nightmares if his second child dies and Steffy’s just barely hanging on!

Do you think Taylor’s reign of terror will end in danger to Steffy? What about Hope and her imminent bundle of joy? We’ll give you updates as other B&B news emerges. Stay tuned to the CBS soap and don’t forget to check CDL often for the latest Bold and the Beautiful spoilers, updates, and news.