The Bold and the Beautiful Spoilers: Steffy, Liam, and Kelly Winning So Far – But Bill Plays The Paternity Card 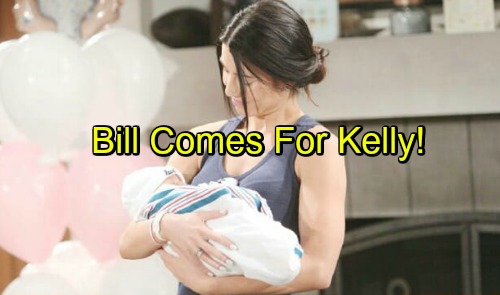 The Bold and the Beautiful spoilers documented Bill’s (Don Diamont) odious interactions with Steffy (Jacqueline MacInnes Wood) dating back to last fall. He basically stalked the poor woman and hasn’t fully backed off yet, despite being told that the authorities would be called out on him. However, Steam’s full reunion, due to Kelly’s earlier than expected addition, has seemingly transformed the dynamic of this incredible storyline.

This scribe believes that B&B’s intertwined Steam, Dollar Still, and Lope storyline is one of the best soap tales told by this steamer in many years. Twists, turns, unexpected reveals, and reprisals. Plus, there’s certainly more to come this summer.

Liam (Scott Clifton) now realizes that Steffy is his future. Yes, she made a terrible, impulsive mistake last fall. Steffy should have never slept with Bill at her grandfather’s guest house. B&B hasn’t explained how Diamont’s character knew she was there. Daytime devotees put that one in the suspension of disbelief category.

Thankfully, Liam found forgiveness and would have reunited with his wife sooner if his horrid father hadn’t used Wyatt (Darin Brooks) to play mind games split Steam and push Lope together. Hope (Annika Noelle), who proved to be a good soul by calling off Lope’s engagement, sadly became part of Bill’s emotional, collateral damage.

Ridge (Thorsten Kaye) has been right all along in a variety of ways. He, more than anyone, knew that Bill was behind the tumult. Liam told Steffy that he understands the message her dad and his father-in-law has been saying from the start of the most recent highly disruptive ruse Bill created.

Most importantly, it’s best for Liam to be with Steffy and Kelly. Doing so will prevent Bill from winning. It took time for Liam to digest the wise council Ridge was offering. But now that he has everything makes sense and fuels indefinite purpose as the Steam trio moves forward as an intact family.

The persistence Ridge demonstrated, in not giving up on Liam and inconsistently encouraging Steffy to persist, has paid off. Liam, in particular, benefited by having an actual father figure in his life since his own, is a narcissistic loon.

Bill surely won’t rest now that Steam has recommitted. His attempts to manipulate, or even potentially claim that Kelly is his daughter, will continue. B&B fans across the globe are praying the paternity plotline isn’t written. Steffy, Liam and Kelly seem to have crossed the finish line and made it home to the cliff house. That’s the one Steffy smartly bought from the ogre.

Unfortunately for many fans, Scott Clifton has made it clear that Steam’s happy ending is NOT in the bag! CDL is a leading source for everything linked to The Bold and the Beautiful. Check back regularly for B&B spoilers and news!