BY Heather Hughes on June 28, 2018 | Comments: one comment
Related : Soap Opera, Spoiler, Television, The Bold and the Beautiful 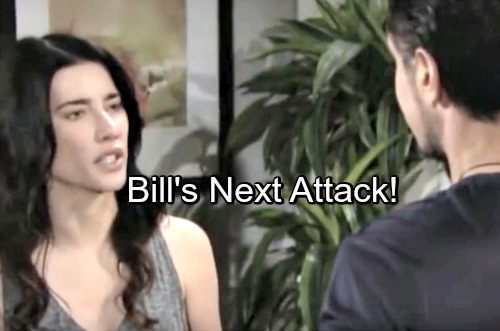 The Bold and the Beautiful (B&B) spoilers tease that Steffy (Jacqueline MacInnes Wood) will face some big surprises. She must feel like she’s dealt with enough of those lately! Steffy had her reunion ripped away thanks to Bill’s manipulation. Then, she was stunned by a fall that caused early labor. After getting back together with Liam (Scott Clifton), Bill (Don Diamont) hit Steffy with a blackmail shocker.

Since things have been so crazy, Steffy just wants to live a calm, predictable life right now. Instead, she’ll stay on this roller coaster of emotions. On the bright side, Steffy’s next surprise should be a good one. The Bold and the Beautiful spoilers say a blackmailer will suddenly back off on next week’s new B&B episodes, July 2-5. Bill fits that description, so it sounds like he’ll drop his threat.

However, Steffy may battle some suspicions. When it comes to Bill, there’s always an ulterior motive. Steffy may wonder why Bill changed his mind so abruptly. She’ll feel like there must be some sort of catch and she’s probably right!

No matter what Bill claims after his mysterious backtracking, Steffy needs to be wary of what’s ahead. It seems likely that Bill will simply shift his strategy. He may decide that using Taylor (Hunter Tylo) against Steffy isn’t going to work.

Bill lied to the cops, so squealing on Taylor could bring consequences for himself as well. He may determine that it’s just not worth it. There has to be a less damaging tactic and Bill will inevitably try to find it. He may have better luck attacking this from another angle.

If Bill can convince Liam to ditch Steffy and reunite with Hope (Annika Noelle), that could definitely work to the devious dad’s advantage. Bill still believes they can all have perfect lives if he gets his way. Will he set some sort of trap to push Liam and Hope together? If so, Bill might have two shots at success.

The first opportunity is obvious. There are still some feelings between Hope and Liam, so Bill’s setup could work like a charm. If it doesn’t and Liam remains loyal to Steffy, Bill might have a backup plan. He could make sure Steffy catches Liam and Hope in a compromising position.

Regardless, this B&B plot could end in total devastation for Steffy. She shouldn’t let her guard down after he abandons his blackmail scheme. The Bold and the Beautiful fans never know what Bill will come up with next! We’ll give you updates as other B&B news comes in. Stick with the CBS soap and don’t forget to check CDL often for the latest Bold and the Beautiful spoilers, updates, and news.