The Bold and the Beautiful Spoilers: Thursday, June 28 – Katie Confronts Wyatt Over Sally – Explodes at Eric

BY Heather Hughes on June 28, 2018 | Comments: one comment
Related : Soap Opera, Spoiler, Television, The Bold and the Beautiful 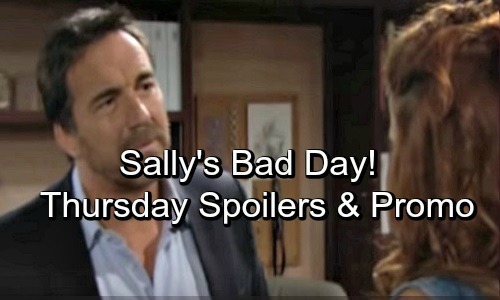 The Bold and the Beautiful (B&B) spoilers for Thursday, June 28, tease that Hope (Annika Noelle) will make herself perfectly clear.  She just declared that Sally (Courtney Hope) would never work as a designer on her line.  Hope will reiterate her point and make Sally understand that she’ll have no input there.  It sounds like Hope will assign meaningless tasks just to keep Eric (John McCook) satisfied.

Sally will protest and push for a true shot at success.  She’ll think she could be a big help if Hope would just cave. However, Hope won’t be willing to budge.  She’ll argue that Wyatt’s (Darin Brooks) the only reason Sally scored the job. Hope won’t believe Sally’s the kind of talent Forrester needs, so she’ll definitely rile the redhead.

B&B spoilers say Sally will struggle to contain her rage.  Her career goals are once again being blocked by an enemy, so this has to be frustrating.  No matter how hard Sally tries, she always hits plenty of roadblocks.  Unfortunately, Ridge (Thorsten Kaye) will serve as another hurdle on Thursday’s new B&B episode, June 28.

The Bold and the Beautiful spoilers say Ridge will confront Eric about his wild decision.  He’ll wonder what in the world his dad was thinking.  Of course, Ridge has made his fair share of mistakes.  He didn’t deserve another chance after he got caught kissing Quinn (Rena Softer), but Eric and Brooke (Katherine Kelly Lang) ultimately gave him one anyway.

Eric might bring that up and argue that Sally’s no worse than Ridge.  Everybody has a few blemishes on his or her record.  Eric just wants to grant Wyatt’s (Darin Brooks) request and see what Sally has to offer.  He’ll stand by his choice and urge Ridge to get on board.

Ridge may have to accept Eric’s verdict, but he doesn’t have to like it.  In fact, Ridge will soon fill Sally in on his displeasure.  Ridge will point out that Sally cost his family a lot of money.  She stole their designs and that’s something he’ll never forget.

Ridge may not buy Sally’s remorse and he certainly won’t trust her.  He’ll offer a warning about playing by Forrester’s rules and keeping herself out of trouble.  Over with Katie (Heather Tom), she’ll stop by Wyatt’s (Darin Brooks) place and express concern.  Katie will mention that she got updates on his new romance with Sally.  She just won’t think this is a good idea.

Wyatt will likely suggest that it’s none of Katie’s business.  He’ll always care about her, but it’s time to move on and let each other live separately.  We’ll keep you posted as other Bold and the Beautiful news comes in.  Stay tuned to B&B and don’t forget to check CDL often for the latest Bold and the Beautiful spoilers, updates, and news.