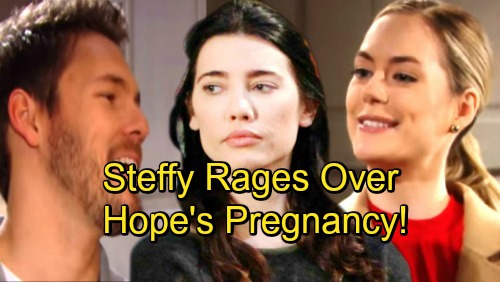 The Bold and the Beautiful (B&B) spoilers tease that another shocking setback is coming up for Steffy (Jacqueline MacInnes Wood). Before we get to that, let’s talk about some great news. During the week of July 2-6, Bill (Don Diamont) will drop by Steffy’s place again. She’ll naturally be irritated since he can’t seem to leave her alone, but he’ll bring some positive updates this time.

Steffy will be taken aback when Bill reveals his change of heart. He’ll give up on his blackmail plot and agree to let the “Steam” wedding happen. Bill isn’t going to win Steffy over like this anyway, so he may decide it’s pointless. Of course, he’ll probably still hold out hope for a future with Steffy. He might suggest that Steffy can move forward with the nuptials, but it won’t alter their destiny.

Bill may maintain that Liam’s (Scott Clifton) a born waffler and will inevitably disappoint Steffy. When that moment comes, Bill will undoubtedly exploit her heartache. It looks like he won’t have to wait long! While Bill grants Steffy’s wish, Hope (Annika Noelle) will make a discovery that could destroy everything her rival’s worked for.

The Bold and the Beautiful spoilers say Hope will find out she’s pregnant, so that’ll definitely change the game. Once Hope wraps her head around this, she’ll fill Liam in and leave him reeling. Poor Steffy won’t see this coming either. She’ll spread the word about her back-on-track wedding and when Liam returns, she’ll insist she wants to remarry right away.

Liam will probably cringe over Steffy’s excitement. He’ll realize he’s about to suck the joy right out of her. Nevertheless, B&B fans can expect Liam to bring Steffy up to speed. He can’t run away from the mess he created. Liam should really learn not to hop in bed with his ex at the first sign of trouble!

Steffy’s sure to face a flood of emotions. She’ll be distraught and furious over this surprising development. Will she accuse Hope of lying or trying to get pregnant intentionally? Those seem like good options. Steffy should be angry enough to spout off all sorts of accusations.