BY Heather Hughes on November 14, 2018 | Comments: one comment
Related : Soap Opera, Spoiler, Television, The Bold and the Beautiful 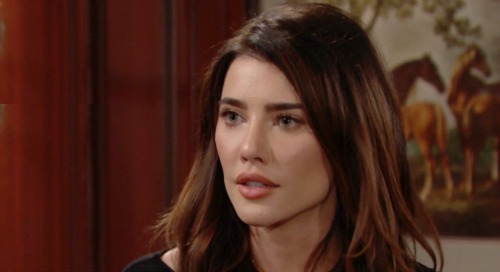 The Bold and the Beautiful (B&B) spoilers tease that the show will continue to hide the truth. We’re not talking about some soapy secret this time; we’re talking about Jacqueline MacInnes Wood’s (Steffy) pregnancy! The thrilled actress recently revealed the gender of her little one. It turns out she’s having a boy, so B&B fans are excited for her.

As for Steffy, she’s single and very much without a bun in the oven. That means B&B will get creative with baby bump hiding and keep the usual storylines moving along – at least for a while. However, the show will have to set up Wood’s maternity leave at some point.

It’s possible they’ll do it without much fanfare like they did with Karla Mosley’s (Maya) time away. The Bold and the Beautiful could let Steffy fade to the background and let that be that. If so, they’d be missing a great story opportunity. Why not work in a juicy reason for Steffy’s exit and make that part of the drama?

Unfortunately, Maya hasn’t been played that big of a role on B&B in quite some time. It wasn’t a huge deal when she stepped away because we weren’t used to seeing her much anyway. Although the Bill (Don Diamont) chaos has been front and center lately, the Steffy, Liam (Scott Clifton) and Hope (Annika Noelle) side of things is about to heat back up. Viewers will certainly notice if Steffy fades out.

With that in mind, The Bold and the Beautiful could take a different route. They might want to make a splash and pave the way for a comeback that’s just as surprising. Instead of ignoring Steffy’s absence or sending her overseas for business deals, what if there’s a shocking reason for Steffy’s departure? There’s be some fantastic options to choose from.

Getting kidnapped and held hostage somewhere would be one possibility. Perhaps some obsessed intimates line fan could become a stalker and go too far. The show could even bring a villain of the past back in the picture instead. Of course, they could also create a scenario where Steffy gets in an accident and falls into a coma. Liam might struggle with old feelings for her as he hoped for a miracle.

Then again, Steffy could inadvertently contribute to the death of Liam and Hope’s baby. If a fight with Hope caused Steffy to lose the kid, Steffy might be distraught enough to leave town and clear her head. She could eventually return home to rejoin the “Lope” loss aftermath.