BY Heather Hughes on April 18, 2018 | Comments: one comment
Related : Soap Opera, Spoiler, Television, The Bold and the Beautiful 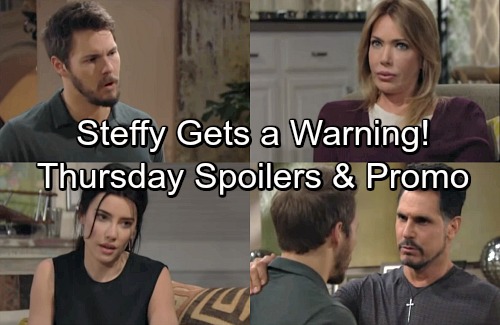 The Bold and the Beautiful (B&B) spoilers for Thursday, April 19, tease that Liam (Scott Clifton) will have some questions for Bill (Don Diamont). Before we get to those, let’s discuss Liam’s relief. Bill convinced his son that the shooter was someone else, so Liam’s finally feeling some peace right now. He’s thankful that he doesn’t have to live with that secret anymore.

Bill will place his hand on Liam’s shoulder and reiterate that he’s not the person who shot him. He may be sorry that he ever believed Liam’s version of events. Bill realizes Liam’s got a good heart. They don’t agree most of the time, but Bill knows violence isn’t his son’s style. Liam just wouldn’t have pumped a bullet in his father, so he’ll hate that he assumed the worst.

Liam will suggest that he’s the one who confessed and pushed his story as fact. They’ll both be happy to put the ordeal behind them. However, Liam will eventually wonder how Bill cleared him. He’ll ask how Bill knew he wasn’t the shooter. When Bill dances around the truth, Liam will reach a shocking conclusion. He’ll determine that Bill knows who fired a shot at his back that night.

Liam may push Bill to divulge the person’s name, but he may not get any answers out of him. Of course, this isn’t rocket science. Steffy repeatedly mentioned that Taylor (Hunter Tylo) helped Bill figure this out. Liam might see Bill’s softer side if he puts the clues together. He could appreciate Bill’s mercy and offer his gratitude for Steffy’s sake.

Bill and Liam will definitely bond in Thursday’s B&B episode, so stay tuned for their warm moments. Across town, Steffy will encourage Taylor to get some professional help. It looks like Taylor will take the advice and offer some of her own. The Bold and the Beautiful spoilers say Steffy needs to listen up!

Taylor will note that Bill’s still got the hots for Steffy, so there’s no way he’s going to back off. Taylor’s not in a position to make demands anymore, so she’ll want Steffy to be careful. Over with Hope (Annika Noelle), she’ll turn to Maya (Karla Mosley) for support. Hope will feel like her chance with Liam is fading fast, but Maya won’t think she should give up just yet.