BY hellodrdavis on November 28, 2018 | Comments: one comment
Related : Soap Opera, Spoiler, Television, The Bold and the Beautiful 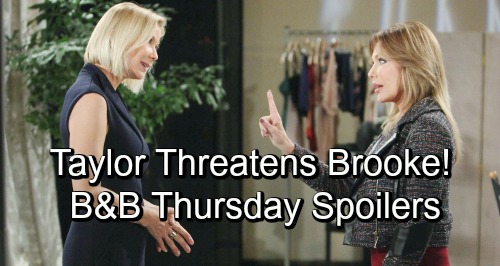 The Bold and the Beautiful spoilers for Thursday, November 29, tease that Hope (Annika Noelle) will be dumbfounded after Liam (Scott Clifton) tells her that Taylor (Hunter Tylo) was the person who shot Bill (Don Diamont). Hope has just had a major run-in with unstable Taylor, but she had no idea that Taylor could be dangerous.

Knowing that Taylor has the propensity to be violent will shock Hope, and a lot of things will cross her mind. She’ll realize how much danger she and her unborn child were potentially in during her run-in with Taylor earlier. And she’ll probably worry about the danger that Taylor might pose to others, like her mother.

Of course, now that Liam has spilled the beans about the shooting, he’s going to have to contend with Steffy (Jaqueline MacInnes Wood) about it. Steffy naturally assumed that Liam would keep her mother’s actions to himself, and she’ll be shocked to learn that now Hope knows, too.

Next, on the new B&B episode on Thursday, November 29, Taylor will have a face-off with Brooke (Katherine Kelly Lang). Taylor’s all about confrontations these days, but her confrontation with Brooke is going to reach a new level. Taylor will accuse Brooke of bullying Steffy, and she’ll probably have a few choice words about Hope as well.

Taylor is convinced that Hope crafted a big plot to steal Liam from Steffy, and that she used Bill’s lies and schemes to her advantage. Taylor will blast Brooke for passing on her ways to her daughter and will vow that history will not repeat itself with their daughters.