The Bold and the Beautiful Spoilers: Update – Ridge and Taylor Bond Over Hatred Of Bill – Form Alliance For Steffy

BY hellodrdavis on November 28, 2018 | Comments: one comment
Related : Soap Opera, Spoiler, Television, The Bold and the Beautiful 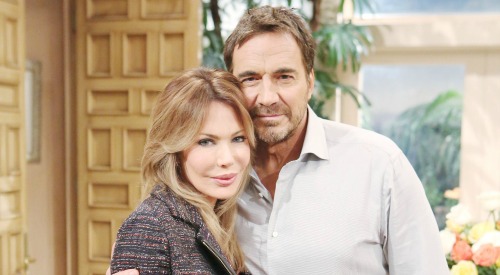 The Bold and the Beautiful spoilers tease that Taylor (Hunter Tylo) will cause some major problems for herself and for Steffy (Jaqueline MacInnes Wood). Taylor has made a big splash onto the scene recently with her angry confrontations against Bill (Don Diamont) and Hope (Annika Noelle). And B&B spoilers say that she’s about to have another major blowout with Brooke (Katherine Kelly Lang).

It won’t be long before Hope and Brooke know that Taylor is the one who shot Bill. And when that information gets out, Taylor is going to be in a real predicament. Her sworn enemy, Brooke, will be armed with information that could put her away for a long time. And Brooke will probably seriously consider turning Taylor in.

But there’s one person who just might be on Taylor’s side in this whole mess…Ridge (Thorsten Kaye). Ridge and Taylor have been on the same page regarding Bill for a while now. They both despise Bill, and they see him as responsible for Steffy losing Liam (Scott Clifton) to Hope. And they both would prefer for Liam and Steffy to be married and raising Kelly (Zoe Pennington) together.

Ridge may prove to be an important ally to Taylor. B&B spoilers say that Ridge and Taylor will come together and bond over their shared hatred of Bill. Ridge may be the only person who understands Taylor’s rage and frustration over Steffy’s current situation. In fact, when Ridge inevitably learns that Taylor shot Bill, he’ll probably congratulate her!

Their bonding over Bill may just be the start of a new Ridge/Taylor relationship – cold it lead to romance? Ridge has been feeling awfully misunderstood by Brooke lately, and he could probably use a little support. Taylor would probably be thrilled to learn about how Ridge set up the custody case so Bill would lose. In fact, she might be the only person other than Thorne (Ingo Rademacher) who thinks Ridge did the right thing.

One thing’s for sure…Brooke won’t be happy about any Ridge/Taylor bonding that goes on. It looks like Ridge and Brooke will probably be on opposite sides on the issue of Taylor’s stability, with Ridge siding with Steffy that Taylor is not a danger to anyone.

Do you think that Ridge and Taylor will form a powerful alliance for Steffy? Stay tuned to the CBS soap and don’t forget to check CDL often for the latest Bold and the Beautiful spoilers, updates, and news.

As it turns out Taylor will not be rekindling her romance with Ridge in the next little while, according to B&B newly released spoilers – she will however become involved with Dr. Reese Buckingham (Wayne Brady)!