The Bold and the Beautiful Spoilers: Tuesday, October 16 Update – Bill Explodes on Wyatt – Brooke Tries Desperately To Save Marriage 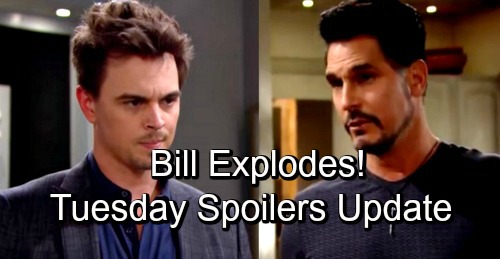 The Bold and the Beautiful spoilers update for Tuesday, October 16, tease that Bill (Don Diamont) will face yet another loss. Bill’s been reeling lately from both his custody suit loss and from Brooke’s (Katherine Kelly Lang) repeated rejections. He’s been trying to better himself, especially as a father, and he’s recently reached out to Liam (Scott Clifton) and Wyatt (Darin Brooks) as a way of healing.

But Wyatt will have some big, and unwelcome, news for Bill. He’ll tell Bill that he’s taken a job at Forrester Creations and won’t be returning to Spencer Publications. Bill will be devastated by the news, and pretty angry with his son, at least at first. But Bill will have to realize that his own actions are what pushed Wyatt away in the first place.

Fortunately, it looks like Bill and Wyatt will be able to work through Bill’s initial shock and anger. Wyatt will let his dad know that he’s made up his mind, and that the job at Forrester is where his future lies, at least for now. He might return to Spencer someday, but for the time being he’s going to put his energies into his new gig. And Bill will have to live with it.

Next, on the new B&B episode on Tuesday, October 16, Brooke and Ridge (Thorsten Kaye) will continue their argument about the state of their marriage. The news about Bill kissing Brooke was the last straw for Ridge, and Brooke’s making it worse by seemingly defending Bill at every turn. It’s looking like Ridge is nearly ready to throw in the towel on their marriage.

Brooke will come to understand just how upset Ridge is, and she’ll beg him to tell her that their marriage isn’t over. She’ll think that they shouldn’t let recent events come between them and their love, but what will Ridge think? Will their argument end on a hopeful tone, or will Ridge basically decide that things are now at the point where they can’t be fixed?