The Bold and the Beautiful Spoilers: Tuesday, September 11 – Steffy Gets Fierce in Fashion Show Test Run – Hope Licks Her Wounds

BY Heather Hughes on September 10, 2018 | Comments: one comment
Related : Soap Opera, Spoiler, Television, The Bold and the Beautiful 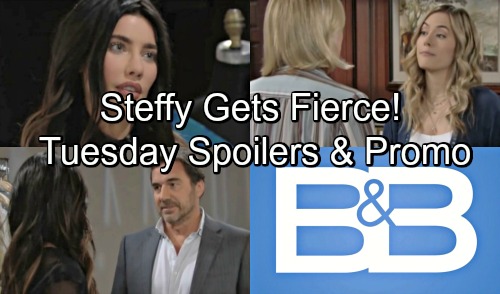 The Bold and the Beautiful (B&B) spoilers for Tuesday, September 11, tease that Hope (Annika Noelle) will have to lick her wounds. She just lost the battle of the Forrester lines, so she’ll understandably be disappointed. Brooke (Katherine Kelly Lang) will wonder how Hope’s holding up after that crushing defeat. She’ll hate that Ridge (Thorsten Kaye) refused to back her up on this.

Hope will seem glum, but she’ll admit she isn’t surprised she lost out to Steffy (Jacqueline MacInnes Wood). Brooke may not be too shocked either. Despite Ridge’s claim that this was strictly about business, that couldn’t possibly be true. There’s just no way Ridge could ignore the fact that his own daughter was involved. The daughter who recently had her family and life torn apart!

During a chat with Steffy the victor, Ridge will note that he knew she needed this. It sounds like pity was indeed part of the equation. Nevertheless, Ridge will believe in Steffy’s line and its chances for success. Steffy will promise that Ridge won’t be sorry. As she prepares for a fashion show test run, Steffy will be determined to show Ridge made the right call.

B&B spoilers say Steffy, Zoe (Kiara Barnes) and several other models will strut their stuff. They’ll hit the runway and make it clear that the intimates line is worthy of a win while Hope burns with envy. Meanwhile, Zoe’s rival will face an uncomfortable situation. Xander’s (Adain Bradley) surprise for Emma (Nia Sioux) won’t lead to the outcome he’s anticipating.

Emma will be pleased when Xander wants to hang out, but his choice of activity will be the problem. He’ll reserve a cabana for just the two of them, so he’ll obviously have sex on his mind. The Bold and the Beautiful spoilers say Emma will immediately pump the brakes. That’s just not a step she’s ready to take yet.

Later this week, Zoe will get updates on the rejection Xander faced. Since she’s got no qualms with lovemaking, she’ll try to use that to her advantage. The Bold and the Beautiful spoilers say temptation’s on the way for Xander. We’ll keep you posted as other B&B news comes in. Stay tuned to the CBS soap and don’t forget to check CDL often for the latest Bold and the Beautiful spoilers, updates and news.