The Bold and the Beautiful Spoilers: Wednesday, August 29 Update – Hope Has Steffy’s Doc – Bill Threatens Katie With Alcoholic Past 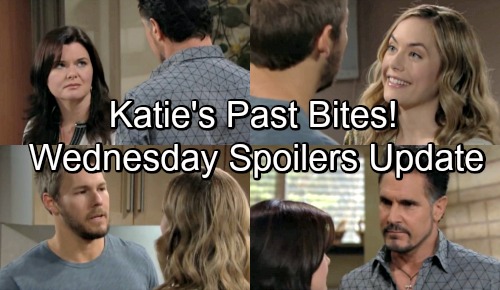 The Bold and the Beautiful spoilers update for Wednesday, August 29, tease that Hope (Annika Noelle) will be over-the-top happy to be at her first ultrasound appointment. Hope and Liam will arrive early for their appointment and she’ll gush that this is the day they’ll be able to see their baby. As far as Hope’s concerned, nothing could go wrong.

But to Hope’s surprise, Liam will voice some concern about their upcoming appointment. Liam will realize that Hope’s obstetrician is Dr. Phillips (Robin Givens) – the same doctor who cared for Steffy (Jacqueline MacInnes Wood) and delivered Kelly (Gabriel Sporman). Liam may feel awkward and slightly embarrassed to be seeing Dr. Phillips again so soon, and with a different baby mama.

Hope will feel a bit weird about the situation, too. She won’t have anything against Dr. Phillips, but it will probably feel…well…awkward to be using the same OB that Steffy used. It may make the experience feel a bit recycled. But Hope and Liam will talk it through and decide to forge ahead with Dr. Phillips.

Meanwhile, on B&B’s new episode on Wednesday, August 29, Bill (Don Diamont) and Katie (Heather Tom) will continue their discussion of Will (Finnegan George) and the custody suit that Katie is threatening to file. Bill has made it crystal clear that he will fight Katie’s attempt to get full custody with everything he’s got if she goes ahead with it.

Bill will attempt again to reason with Katie, so that they can work out any issues involving Will and his relationship with Bill on their own, without getting the courts involved. Bill will insist to Katie that he loves his son, and that Katie knows it.

But it looks like Katie will not back down. After his attempt to reason with Katie fails, Bill will bring out the big guns and tell Katie that he will use her past alcoholism against her. “There was a time,” he’ll say ominously, “that I was the only parent Will could count on.” It sounds like Bill’s ready to play dirty.