BY Marcy Cohen on November 7, 2018 | Comments: one comment
Related : Soap Opera, Spoiler, Television, The Bold and the Beautiful 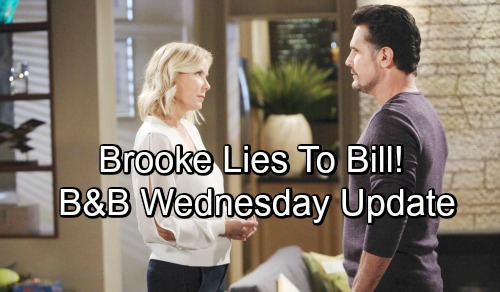 The Bold and the Beautiful (B&B) spoilers for Wednesday, November 7, tease that some final fashion show prep will get underway. Steffy’s (Jacqueline MacInnes Wood) got a solid team backing her up, which is great news. They’ll need all hands on deck as they get ready for the launch of their latest designs.

It looks like the models will do a run-though performance, so Xander (Adain Bradley) and Zoe (Kiara Barnes) will be in the mix. They’ll do their jobs, but they’ll make it fun with a little flirting. Xander claims to be interested in Emma (Nia Sioux), but he certainly doesn’t act like it. He’s all over his ex every chance he gets, which is exactly why Zoe came to town.

Emma has struggled with trust issues in the past, so she’s tried to keep herself in check. Some of her past relationships have failed over irrational envy. Emma didn’t want to make the same mistake by assuming the worst and driving Xander away. However, she’ll soon realize her suspicions have always be right on the money.

Emma isn’t just being paranoid here. She has every reason to be jealous since Zoe’s making moves and Xander’s letting her. On Wednesday, B&B spoilers say Emma will witness a close encounter. She’ll spy on Xander as he’s cozying up to Zoe and allowing her to invade his space, too.

What will Emma decide to do about Xander and Zoe’s bond? There are a few tactics to choose from. Emma could do nothing, but that plan obviously isn’t working. She needs to give another strategy a shot, so there are two other routes she could take. Emma can either throw in the towel or step up the sexiness.

Xander probably isn’t worth all this, but Emma appears to think he’s some prize. We’ll see how far she’s willing to go for his romance. At some point, enough may be enough. In the meantime, The Bold and the Beautiful spoilers say Brooke’s (Katherine Kelly Lang) guilt will grow stronger. Bill (Don Diamont) sought info about Ridge (Thorsten Kaye) and the judge twice, but Brooke just couldn’t offer any details.

Nevertheless, Brooke will loathe the situation. She’ll be frustrated as Ridge pushes her to stay quiet, but it seems she’ll indeed keep her mouth shut. That’ll leave Bill to secure evidence without Brooke’s help, so Ken (Danny Woodburn) the IT guy will pop up on Friday.