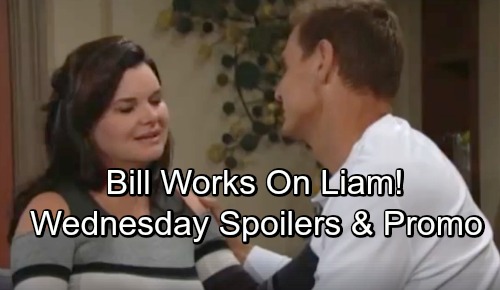 The Bold and the Beautiful (B&B) spoilers for Wednesday, September 26, tease that Ridge’s (Thorsten Kaye) anger will continue to build. He’ll suggest there isn’t one member of his family that Bill (Don Diamont) hasn’t scarred in some way. Ridge will just hope to prevent more damage. He’ll vow to do anything he can to make sure Katie (Heather Tom) gets full custody of Will (Finnegan George).

Of course, Ridge has already done plenty! He went to Judge McMullen (Joe Lando) and pushed for a huge favor, so he’ll count on that plan working out. If all goes well, the judge will cave in and make Ridge a happy man. However, assisting Katie is only part of the story. It’s clear that Ridge wants to make Bill suffer, but the determined Spencer will fight back on Wednesday’s new episode, September 26.

The Bold and the Beautiful spoilers say Liam (Scott Clifton) and Wyatt (Darin Brooks) will get a visit from their father. B&B fans know Wyatt has been subpoenaed to testify for Bill. Liam, on the other hand, has been subpoenaed to testify for Katie. Bill will decide he’d like to bring his boys together on this. He’ll urge them to think of Will’s future and help him keep his parental rights.

Liam may bring up all the terrible mistakes Bill’s made. Those wounds are still pretty fresh, so joining Bill’s team should be tough. Nevertheless, Bill will argue that he could have a do-over with Will. He’ll admit that he screwed up big time with Liam and even Wyatt. Bill will still want to make amends for his bad behavior, but he could start fresh with his youngest son. He could actually be a decent dad.

Liam won’t be certain he can turn against Katie, so Bill will shift his strategy. He’ll try piling on the guilt in Wednesday’s episode. Bill may insist that Will’s the person Liam would be hurting most. Is it really fair to keep Will’s father at a distance? It sounds like Liam will have a difficult choice to make.

Meanwhile, Katie (Heather Tom) and Thorne (Ingo Rademacher) will celebrate their recent wedding. The Bold and the Beautiful spoilers say they’ll enjoy the afterglow of the ceremony, but worries will quickly creep in. Katie will just wonder why everything has to be so complicated!

Naturally, Thorne will provide reassurance. He’ll promise that it’ll all be much simpler soon enough, so Katie will try to trust him. We’ll give you updates as other B&B news comes in. Stay tuned to the CBS soap and don’t forget to check CDL often for the latest Bold and the Beautiful spoilers, updates and news.