The Bold and the Beautiful Spoilers: Week of February 26 – Bill Goes Ballistic Over Watie’s Engagement – Seeks Custody of Will 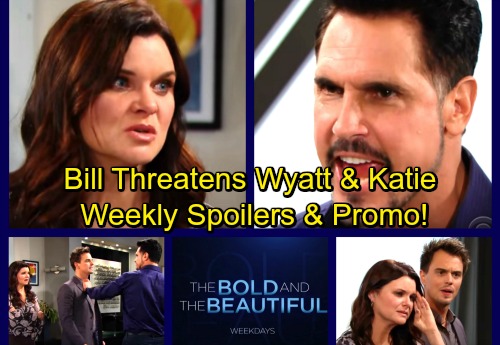 The Bold and the Beautiful (B&B) spoilers for the week of February 26-March 2 tease that Wyatt (Darin Brooks) and Katie (Heather Tom) will tackle a challenge. Thanks to Wyatt’s latest move, things just got a whole lot harder. They really should’ve told Bill (Don Diamont) about their romance before it got so serious. Now they’re about to drop an engagement bomb on him!

Wyatt and Katie will decide they should do this together. They’ll hope that if they team up, they can convince Bill to get on board. Since Katie and Wyatt know how Bill can be, they’ll definitely expect some drama. They’ll think they’re prepared for Bill’s wrath, but they have no idea just how nasty this confrontation will get. 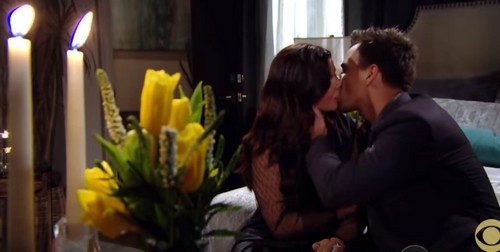 The Bold and the Beautiful spoilers say Wyatt will announce that they’re getting married. Bill will be shocked and appalled by the news. He won’t allow his ex-wife to wed his son. Bill will snap that it’ll happen over his dead body. He’ll really be fuming, but Wyatt will stand up to his father.

B&B fans know that Wyatt’s truly in love with Katie. He was miserable without her and it made him realize that they should be in each other’s future. That’s why Wyatt won’t put up with Bill’s threats. He’ll contend that Bill doesn’t have to be happy about this, but he does have to accept it. 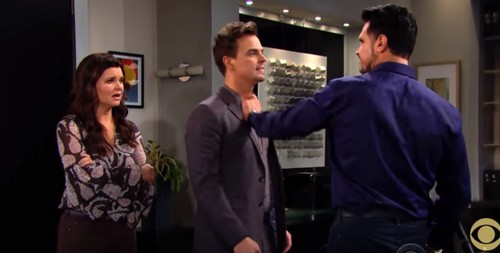 Katie will back Wyatt up. She won’t think Bill has any right to tell her who she can or can’t marry. That’s especially true since he broke up their marriage by cheating with Brooke (Katherine Kelly Lang), who ultimately left him. Bill’s the king of messy romances. He obviously doesn’t know what real love’s supposed to look like.

Bill shouldn’t be standing in the way of two people who have a chance at a solid relationship. Unfortunately, that won’t stop him from trying. The Bold and the Beautiful spoilers say Bill will deliver a harsh ultimatum. He’ll argue that “Watie” ends now or else he’s suing for custody of Will (Zane Achor).

Katie will cry as Bill vows to follow through on his promise. She’ll worry that Bill will throw money around to take away her son. This is certainly despicable, Bill will get what he’s got coming soon enough. We’ll give you updates as other B&B details emerge. Stick with the CBS soap and don’t forget to check CDL often for the latest Bold and the Beautiful spoilers, updates and news.