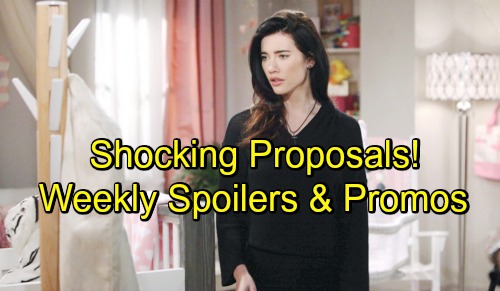 The Bold and the Beautiful (B&B) spoilers for the week of July 30-August 3 tease that some “Still” shockers are brewing. Now that Steffy’s (Jacqueline MacInnes Wood) with Bill (Don Diamont), we’ll see loads of family drama. For starters, Ridge (Thorsten Kaye) will fume over Steffy’s decision to marry a monster. Ridge won’t think Bill’s worthy of being in Steffy’s life, but he won’t change her mind.

Meanwhile, Wyatt (Darin Brooks) will consider the fate of the Spencer clan. He’ll realize that Bill will wreck everything if he marries Steffy. Wyatt will do his best to convince Bill of that this week. He’ll urge his dad to back out of the marriage before he does irreparable damage. If Bill goes through with this, Liam may turn against him forever.

Of course, Bill won’t really care what Liam thinks. If his son wants to hate his guts, that’s fine by him. All that matters to Bill is being with Steffy. He’ll surprise her with a nursery for Kelly and push for a wedding ASAP. The Bold and the Beautiful spoilers say Bill will put Steffy on the spot, but it looks like she’ll stick to the plan.

Elsewhere, Ridge will push Liam to stop the nuptials. He’ll renew Liam’s desire to fight for Steffy, but it may be too late. There’s a good chance Steffy will indeed become Mrs. Bill Spencer this week. Afterward, Steffy will make a major announcement at Forrester Creations. She’ll reveal that FC has a new owner, which should be herself thanks to the shares she bargained for.

Other Bold and the Beautiful spoilers say Ridge and Brooke’s (Katherine Kelly Lang) conflict will heat up. As usual, they’ll be fighting about their daughters. Their “Steam” vs. “Lope” battle will really get out of hand! Brooke and Ridge’s relationship could be on rocky ground if they continue down this path.

Back with Liam, he’ll turn to Wyatt for support. B&B spoilers state that Liam will need a shoulder to cry on and a place to stay. Wyatt will happily offer both. If there’s a silver lining to all this, it’s the fact that Wyatt and Liam will grow closer. Their brotherly bond should get much stronger in the coming episodes.

Finally, Thorne (Ingo Rademacher) will have a proposal for Zoe (Kiara Barnes). He’ll tempt her with a new modeling position, which Zoe will undoubtedly accept. This is exactly what she needs to push Emma’s (Nia Sioux) buttons and make her move with Xander (Adain Bradley).

Some fantastic scenes are on the way, so stay tuned for B&B excitement. We’ll give you updates as other news comes in. Stick with the CBS soap and don’t forget to check CDL often for the latest Bold and the Beautiful spoilers, updates, and news.