The Bold and the Beautiful Spoilers: Week of May 14-18 Update – Fierce Wars, Exposed Secrets and Dirty Deals

BY Heather Hughes on May 12, 2018 | Comments: 2 comments
Related : Soap Opera, Spoiler, Television, The Bold and the Beautiful 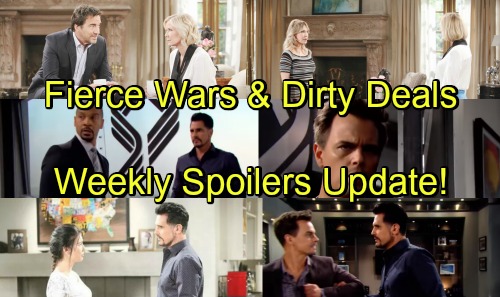 The Bold and the Beautiful (B&B) spoilers update for the week of May 14-18 tease that Liam’s (Scott Clifton) future will remain a hot topic around town. First, Ridge (Thorsten Kaye) will talk to Brooke (Katherine Kelly Lang) about Bill’s (Don Diamont) manipulation. He’ll insist that “Dollar Bill” did something to destroy Steffy (Jacqueline MacInnes Wood) and Liam’s reunion.

Brooke would rather focus on Liam’s connection with Hope (Annika Noelle), so that’s exactly what she’ll do. Ridge won’t be happy that they’re at odds on this, but he’ll just have to deal with it. Meanwhile, Justin (Aaron D. Spears) will rip into Bill for all his dirty deeds. In fact, Justin will have a big problem with his own role in them. He’ll feel like he always has to break rules and shatters lives.

When Justin specifically mentions Bill’s latest plot, Wyatt (Darin Brooks) will emerge from the hallway. He’ll be stunned to discover that his father used him to break up Liam and Steffy. The Bold and the Beautiful spoilers say Wyatt will want to come clean to Liam, but Bill will insist that’s not happening. He’ll try to bribe Wyatt for his silence, but that plan will just anger Wyatt even more.

Bill will deliver some harsh threats as well, but it’ll be tough to scare Wyatt. Once he knows the truth, Wyatt will really be riled. He’ll want to put an end to this mess, but Katie (Heather Tom) will make an interesting pitch. She’ll think they can use this as blackmail material, so Katie and Wyatt might be given Bill’s blessing for marriage soon. B&B fans can definitely expect some sort of deal.

Other Bold and the Beautiful spoilers say Taylor (Hunter Tylo) and Brooke will face off. They’ll have a major showdown over all the Steffy, Hope and Liam developments. Over with Ridge, he’ll make a desperate attempt to convince Liam of his suspicions. Ridge will maintain that Liam has been duped. He’ll want Liam to open his eyes and see that Bill set all this up.

Liam won’t budge for now, so Ridge may have to rely on other tactics. He’ll do anything to help Steffy reunite with Liam and get their family back on track. We’ll give you updates as other B&B news comes in. Stay tuned to the CBS soap and don’t forget to check CDL often for the latest Bold and the Beautiful spoilers, updates, and news.