BY Heather Hughes on April 28, 2018 | Comments: one comment
Related : Soap Opera, Spoiler, Television, The Bold and the Beautiful 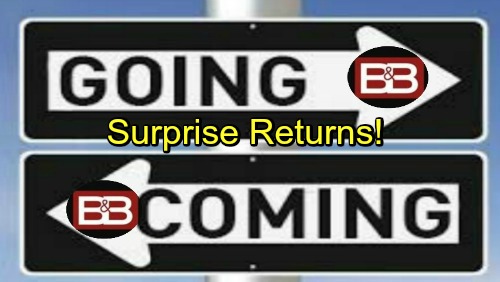 The Bold and the Beautiful (B&B) spoilers reveal that there’s some comings and goings news to pass along. For starters, we should talk about Taylor (Hunter Tylo). She’s headed back to B&B for more confrontations and maybe even some scheming! B&B fans had an enthusiastic response to Taylor on social media, so it’s good that the show plans to include her more for May sweeps.

In an interview with Soap Opera Digest, Tylo opened up about her big return and what it was like to be back on set. “I came on when the show had only been on three years, so being here now brings back some of the nostalgia,” Tylo said. She certainly seems excited about giving longtime viewers this treat.

Tylo also suggested that B&B should include some other blasts from the past. She even offered a comment that could serve as a hint. Tylo teased, “I don’t know if anybody is just waiting to see some of the other familiar faces…I hope so!” The Bold and the Beautiful spoilers say some surprises are in store, so anything can happen on the CBS soap.

Even if nothing’s in the works yet, Tylo has two names in mind. She noted that she’d love to see Ian Buchanan (ex-James) and Kabir Bedi (Omar) back in the mix. Tylo added that she’s excited about working with Thorsten Kaye in his version of Ridge. She had a great working relationship with Ronn Moss (ex-Ridge), but it can be fun to see a different side of things with a recast.

In other B&B news, a Bold and the Beautiful alum had a terrifying accident. Winsor Harmon (ex-Thorne) was hit by a car while cycling, so that left him pretty rattled. Thankfully, Harmon didn’t end up with any broken bones.

On Instagram, Harmon indicated that he’d need some rehab for his neck, shoulder and back. He’s just relieved that this accident wasn’t worse. Harmon credited his helmet with saving his life, so let that be a lesson to all you cyclists out there!