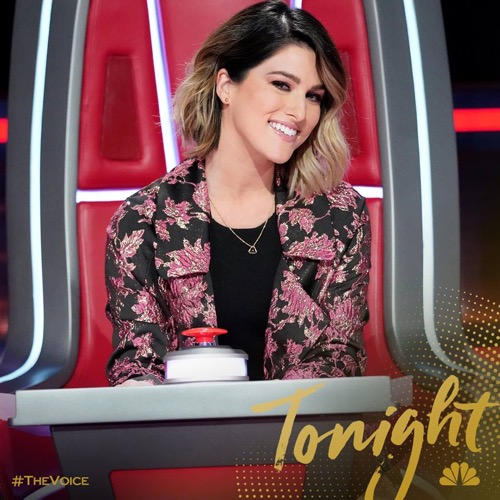 First up tonight is Team Alicia with Britton Buchanan vs Dallas Caroline, they are the two youngest; Chris Blue is the advisor for this knockout. Britton is singing, “New York State of Mind,” by Billie Joel. Dallas is singing, “Bless The Broken Road,” by Rascal Flatts.

Adam: “Britton I couldn’t get you on my team, but thankfully you were not on Blake’s team. Dallas you broke my heart also, I see the progress in the two of you but I would have to go with Britton.”

Blake: “Hi Dallas, there something about how pure your tone is I thought you did a good job. Britton, are you the guy I used my block on? I love those blocks, you got a style that is so cool about you. If I had to choose, I would give it to my girl Dallas.”

Kelly: “Britton, this was almost like a crooner type thing, you almost have like this old school rat pack thing about you. Dallas, You are a story teller and if you could reign in that pitch you would be like Dolly and no other girl out there right now.”

Alicia: “I think Dallas you were stable at the mike and you did a good job, I’m proud of you. Britton, you wanted to try something new and it was great, I am proud of you too.” Alicia announces that the winner of this knockout is Britton.

Next is team Kelly with advisor Cassidy Pope and this knockout brings D.R. King vs, Tish Haynes Keys. D.R. is singing, “I Know I’m Losing You,” by Rod Stewart. Tish is singing, “Lady Marmarlade,” by Patti LaBelle.

Alicia: “I am just speechless, D.R. you took that song to a whole new place where it has never been sung before. Tish, I love that you had all that sass in your flow and everything, it was so voulez vous couchez avec moi.”

Adam: “I will say one thing, D.R. took that Rod Stewart song and his version of it was different. Tish, messed it up for everyone and I love you. I think you are both phenomenal.”

Blake: “This is world class talent, D.R. everytime you are on the stage I know it is going to be something exciting, it’s going to have a twist to it. Then there is Tish and it’s crazy.”

Kelly: “Both of you equally freaking killed it.” Kelly announces that the winner is D.R. Kelly presses her save for Tish, then Adam hits his button to steal her. Tish has to decide who she wants as her new coach, she is having a hard time, she picks Kelly.

Next up is Team Blake and he has paired Dylan Hartigan vs. Wilkes, they both have a rock element and the deciding factor on who goes forward will be whoever gives Blake the best performance, Chloe Kohanski is advising. Dylan is singing, “You Are The Best Thing,” by Ray LaMntagne and Wilkes is singing “The Climb,” by Miley Cyrus.

Kelly: “I thought you were already there Wilkes, and then you went way up there. it was like that was awesome. It shows that you not just a great vocalist and a one trick pony. That being said, I love Dylan, you took on the Taylor Swift and I’m obviously going to go for Dylan because he was on my team.”

Alicia: “Dylan you are super dynamic and you have this energy that makes everyone join in what you do. Wilkes I don’t know if this is your secret weapon that you do but you dial it all the way back and then the music takes over you and like said wow.”

Adam: “Dylan, every time you sing we want to see more and more. Wilkes you are just so crazy with your range and tone, I might go with Wilkes because of the song, but Dylan you are ridiculous.”

Blake: “I thought you both did everything you could do and Dylan I will say to you that personality, I have never met anyone quite like you. Wilkes, we are not sure if you are completely conscious between those songs.” Blake announces that Wilkes is the winner of this knockout. Kelly steals Dylan, he is right back in the competition.

Team Adam is up next and he has paired Gary Edwards vs. Rayshun Lamarr and their Adivsor is Jordan Smith. Gary is singing “Many Rivers to Cross,” by Jimmy Cliff and Rayshun is singing, “Fallin”, by Alicia Keys.

Kelly: “Rayshun is ballsy as hell, you are confident, you are singing in front of the song writer, one of the best records and your vocals were insane. Gary I might just go with you because your low tones were like butter.”

Blake: “Rayshun, that was so good, so full of energy and passion, you are full of it. Gary, you sang the hell out of that song dude.”

Alicia: “Gary you did a beautiful job and your tone was so pure, how did you keep one breath. Rayshun,I couldn’t believe you hit those notes.”

Adam: “Rayshun I still can’t believe you hit those notes, I am glad you did it. Gary, you were like a transformation, that is not what happened in rehearsals.” Adam announces that Rayshun is the winner of this round. Blake steals Gary.

Team Kelly is the last one tonight she is pairing her most difficult twosome, Alexa Cappelli vs Jorge Eduardo, they are both different but home soulful voices and are being advised by Cassidy Pope. Alexa is singing, “Goodbye Yellowbrick Road,” by Elton John, Jorge is singing, “Adorn,” by Miguel.

Alicia: “Jorge you came out here and gave it all the energy you had and were completely in your zone. Alexa you have this really powerful voice you don’t quite come off like you are going to bang like that, Alexa you took this.”

Adam: “Jorge that was a good song for you. Alexa you have what it takes in you to be a really incredible singer and I have seen that in you since the beginning, there is a lot of potential in you.”

Blake: “Jorge it is kind of undeniable when you are on stage and you hear the reaction in here, people love you. Alexa you have this very unusual sounding voice and it is just powerful, I think that maybe you didn’t navigate that melody as well as you could have but I think you are still one of the best singers in this competition.”

Kelly: “I love Jorge, even when you switch it up you are cool. Alexa that was a crazy hard melody. You both did well.” Kelly announces that the winner of this knockout is Alexa.

As the night went on Adam advanced Reid Umstattd to the playoffs with his rendition of, “Let Him Fly.”

Last one up tonight is team Alicia with Kelsea Johnson vs, Sharane Calister with Chris Blue as advisor. Kelsea is singing, “Rise Up,” by Andra Day, Sharane js singing, “All I Could Do Was Cry,” by Etta James.

Adam: “Sharane you were so connected emotionally with what was going on, that is what makes you so great. Kelsea, the only difference between perfect and close to perfect is what is in your heart. I wish I could have you both.”

Kelly: “Sometimes you go raspy Kelsea but you still nailed it. Sharane you are the most emotional singer on this show.”

Blake: “Sharane you just have those pipes like wtf. Kelsea I don’t know if you watched last season, you are like Chloe.”

Alicia: “I think Kelly brought up something interesting because I have been telling Sharane somehow I still feel a wall between us, there is more to come out but you always rise to the occaision. Kelsea I see so much that has broke through with you. This is really really hard for me to choose.” Alicia announces that Kelsea is the winner of this knockout. Adam uses steal to take Sharane.