The Young and the Restless Spoilers: Abby Destroys Dark Horse from the Inside, Betrays Nick?

BY Marcy Cohen on August 1, 2018 | Comments: one comment
Related : Soap Opera, Spoiler, Television, The Young and the Restless 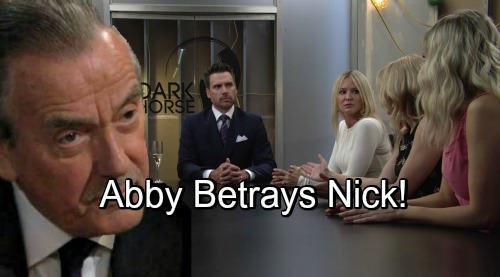 The Young and the Restless (Y&R) spoilers tease that Victor (Eric Braeden) will push for a truce next week. That always sounds like good news, but it never is. Whenever Victor calls for peace with someone, it’s usually because he intends to double-cross him or her. Even if the peace offering is genuine, Victor still finds a way to manipulate it into something evil. That’s just how Victor rolls!

Nick (Joshua Morrow) is Victor’s main adversary right now, so he might be the one Vic reaches out to. He could suggest that this war isn’t going to do Nick’s new company any favors. However, Nick seems pretty intent on completely destroying his father. He might play along for Victor’s sake, but it’s doubtful he’d really take him up on the truce idea.

With that in mind, there’s a chance Victor will seek a truce with someone else. Could Abby (Melissa Ordway) be pulled back into Victor’s web? She was treated horribly at Newman Enterprises, so she opted to resign and forge a new path at Dark Horse. However, Victor might hope he can make amends with a mutually beneficial arrangement.

Victoria (Amelia Heinle) was promised the COO spot and a guarantee that she’d run Newman once Victor retired. She got it all in writing, but Victor’s awfully tricky. It’s safe to assume Abby signed a contract when she was COO, too. Look where that got her!

Victor could always use some legal loophole to double-cross Victoria if need be. If nothing else, Victor could agree to make Abby a co-CEO one day. He wouldn’t be breaking his promise to Victoria, but he’d have a reward in place for Abby. Whatever the case, Victor would be smart to use his daughter to his advantage.

Abby’s in the perfect position for Dark Horse destruction. She could tear this company down from the inside. Victor used Kyle (Michael Mealor) as a Jabot spy for a while, so maybe it’s Abby’s turn to do some spying at Dark Horse. She might become a mole and pass along any helpful information. Y&R fans could certainly imagine Abby duping Nick for her own selfish gain.

Abby would have to be extremely careful, but she might get by with it for a while. By the time Nick realized what was happening, Dark Horse could be well on its way to crumbling. The Young and the Restless could have Abby could make some bold move to seal the company’s fate.

Will Victor convince Abby that Nick’s venture is destined for failure? Will he get her to rush Dark Horse’s ruin along? The Young and the Restless spoilers say Abby could be tempted by the right offer! We’ll give you updates as other Y&R details emerge. Stay tuned to the CBS soap and don’t forget to check CDL often for the latest Young and the Restless spoilers, updates, and news.