The Young and the Restless Spoilers and Recap for Wednesday, August 22: Kyle The Rat, Ashley The Snake and Billy The Kid

BY Joanna Mazewski on August 21, 2018 | Comments: one comment
Related : Soap Opera, Spoiler, Television, The Young and the Restless 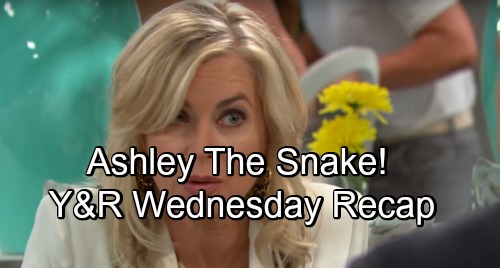 The Young and the Restless (Y&R) day ahead spoilers and recap for Wednesday, August 22, 2018 begin at Jabot where Ashley (Eileen Davidson) tells Kyle (Michael Mealor) the great news that Jack (Peter Bergman) was able to convince Nick (Joshua Morrow) to use Dark Horse and buy the leasing company; stopping Billy (Jason Thompson) from opening the Jaboutiques.

Phyllis goes into Crimson to get a coffee, but Sharon is shocked to see her after all the venomous things she spewed at her the other night. Phyllis admits she is still angry with her daughter, Summer for being a hypocrite. Phyllis also tells Sharon the only reason Summer is being nice is because Nick is paying her off. Sharon suggests Phyllis take a weekend away with her daughter to reconnect with her.

Unfortunately for Jack, Nick isn’t playing his games when he suggests Nick cancel several of the leases, insisting they are bad for business. Nick angrily tells Jack to fix his priorities as this is not a personal vendetta. Nick calls out Jack on manipulating him and refuses to cancel the leases, saying they give him leverage over Billy in the long term. He sends Jack on his way, reminding him whose company he works for and whose interest he is there to serve.

Lily (Christel Khalil) continues to struggle with the accident, waking from a terrifying nightmare. Cane (Daniel Goddard) comforts her, but also suggests she seeks professional help. Later, the couple are at Crimson where Sharon (Sharon Case) reminds them that they have plenty of support and people who love them. After Cane leaves for work, Lily who knows Sharon has been studying psychology in school, asks to talk to her, desperately needing a friend.

Lily reveals she could be facing 20 years in prison and doesn’t know how her family would deal with that. She tells Sharon about her dream, saying since she doesn’t remember all the details of the accident, the nightmares are bad because its her family, children, dad and brother, bleeding and dying in the car.

Sharon advises her to forgive herself for her own sanity and for the sake of her children. Sharon spots the heart carved in the wall with “JT + Colleen” inside it, and tells Lily that she isn’t a murderer, it was an accident and her penance is she will always carry this with her. Lily hugs Sharon before she leaves the coffeehouse.

As Ashley is waiting, Neil calls her, but she dismisses him when Jack arrives and informs Ashley about Nick’s decision, and she promises she will take care of it herself. Jack says the one good thing about Billy becoming CEO is it brought them back together; Ashley walks away rolling her eyes.

Ashley meets with Kyle, admitting she needs his help now that the plan with Dark Horse fell through. She needs Kyle to encourage Billy’s reckless behavior, while they monitor it closely. Once they have enough evidence, they can seek a non-confidence motion and the blood Abbott clause will place Traci (Beth Maitland) as CEO, who can then remove the clause and place Ashley at the helm. Kyle loves how devious his aunt Ashley truly is.

Jack and Neil meet at GCAC, where they talk about Lily’s sentencing. Neil is trying to stay strong for everyone, admitting Ashley has been a great support. Jack had no idea, but he feels they would be great together and casually tells Neil that in case he was curious, Ashley definitely doesn’t have another man in her life.

Neil finds Ashley at Jabot, wanting an answer for dinner, They both enjoyed their time together, but admit they have too much going on in their lives to commit to anything. They agree to simply have a good time and see where it could lead.

Summer (Hunter King) tells Kyle all about her plans for Philadelphia but he hopes her reservations are refundable; when she demands to know what he is talking about, he suggests this vendetta she has has a lot less to do with Billy than all the problems she has with her mother. He suggests it would take way more guts to go talk to Phyllis about it and the results would be far more satisfying. Summer mocks Kyle, saying it was a nice try and he should get the car detailed for its new owner!

Summer lies to Phyllis, saying she is going away for the weekend on a yoga retreat and has zero interest in what Phyllis thinks about it. Phyllis throws in Summer’s face that is fine, as she will be busy packing while Billy is away, since he suggested they move out of Summer’s apartment.

Summer stops Kyle at Crimson, paying for his drink, saying she proved him wrong twice. That she told her mom about going away and that clearly Billy wanting to move out of her place is because he is way too attracted to her. Kyle claims he doesn’t want to listen to any of it as he has BIG plans of his own. She taunts him that his plans never succeed because he’s never willing to go as far as she is. Kyle leans in, warning her that she will soon learn how far he is truly willing to go.

Sharon and Nick share an intimate moment where she tells him about how Lily’s situation is affecting her after all the bad things she has done. He holds her, reminding her that everyone has moved forward; both feel they are lucky to be back together.

Kyle finds Phyllis on the rooftop, suggesting she should attend the trade show in Philadelphia. When she questions him, he reveals that Summer lied to her about the yoga retreat and is planning on being in Philadelphia to “Welcome Billy to Philly!”