BY Sean O'Brien on August 26, 2018 | Comments: one comment
Related : Soap Opera, Spoiler, Television, The Young and the Restless 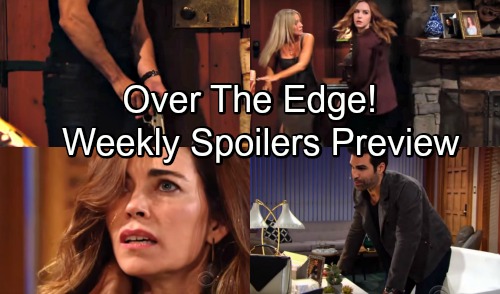 The Young and the Restless spoilers tease that the week of August 27 will be torturous for the coverup crew. Faced with increasing pressure from Genoa City’s newest character, Rey Rosales (Jordi Vilasuso), its most fragile member, Victoria (Amelia Heinle), will be pushed toward a mental breakdown.

Rey spots the odd and ever-revealing contingent of Vickie, Nikki (Melody Thomas Scott), Phyllis (Gina Tognoni), and Sharon (Sharon Case) having another sit-down at Crimson Lights. But why is he on their trail and what does he actually suspect?

Vickie tells her cohorts that Rey is asking questions about J.T. (Thad Luckinbill), as they look transfixed. She later tells her mother that they need to stay one step ahead of this mysterious stranger.

Vilasuso debuted earlier this month and has since been revealed as Arturo’s (Jason Canela) estranged brother. The Rosales’ family is thus Y&R’s newest clan, which is quite noteworthy.

The elder Rosales sibling is shown in a subsequent scene inside the cottage on the Newman Ranch while dimming the lights. Then, he’s seen pulling his gun, cocking the trigger by the front door.

Sharon and Mariah (Camryn Grimes) are shown in Shick’s renewed, though possibly temporary home, while Rey is present. Case’s character subsequently is on the phone talking of the danger Rey possibly represents in their lives.

Mariah evidenced suspicions in recent weeks about what really happened on that fateful night at Vickie’s Father Knows Best house. Hardcore fans know that Y&R created a setting that was similar to the classic nighttime sitcom being referenced, which originally served as Villy’s home.

Years later, the updated interior of Vickie’s home became the daytime location where Mariah fell unconscious after drinking way too much. She only has sketchy memories of hearing a man’s voice and doesn’t know (yet) that J.T.’s life was snuffed out by three-time killer, though all in self-defense, Nikki Newman.

Rey is then seen in Victoria’s deluxe Newman Enterprises’ office splash. J.T.’s written victim is seated at her desk in a defensive posture while Rey tells her that she knows more than she’s willing to admit.

Phyllis, who anointed herself as the fixer, talks with Sharon. Tognoni’s character believes that it’s only a matter of time before Vickie is pushed over a mental edge. Both ladies are concerned that Vickie’s fall-down will expose what really happened to Mr. Hellstrom, who the coverup crew illegally buried in Chancellor Park after Nikki unintentionally killed him.