BY Sean O'Brien on December 19, 2018 | Comments: one comment
Related : Soap Opera, Spoiler, Television, The Young and the Restless 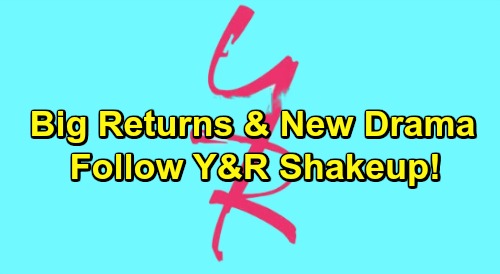 The Young and the Restless spoilers tease that the departure of executive producer and head writer Mal Young will naturally impact current storylines. Chief among them is the long-running arc involving J.T. Hellstrom (Thad Luckinbill).

It would seem odd that Y&R’s new executive producer, Tony Morina, and head writer, Josh Griffith, would continue the J.T. Dies murder mystery indefinitely, or at all. Young’s final episodes could have already wrapped this arc, so viewers will soon see what happens in this regard.

In most instances, new management implements its own vision at whatever company. On a soap opera that means ongoing storylines are tied up, some actors could depart in coming months, while others, including former cast members return.

Common sense and respect would have allowed Young to have ridden all current major storylines to their conclusions, or at least to have set the main course the ending’s were heading. Hardcore Y&R fans know that the J.T. arc crossed the eight-month line this month, though one could technically say that the full storyline involving Luckinbill’s character actually began when the actor returned to the show late last year.

As of the moment, Nikki’s (Melody Thomas Scott) accident serves to further this story in varied ways. It’s drawn Rey (Jordi Vilasuso) even closer to learning the coverup crew’s secrets, while also drawing Victor (Eric Braeden) back to Genoa City on Christmas Eve day. That alone will shake up the plot line in unpredictable ways.

Victor is currently tagged as the top suspect in J.T.’s murder. The Moustache is innocent, which will be proven somehow. But Nikki’s comatose state won’t make her less guilty of having perpetrated the accidental killing and having to face eventual justice for not reporting what happened, or for willingly being involved in numerous connected crimes that followed.

Vickie (Amelia Heinle) lied to Paul (Doug Davidson) about J.T.’s fate. That must mean she’ll need to deal with legal charges. The same is true, to lesser degrees for Phyllis (Gina Tognoni) for her role as the self-appointed fixer, and to Sharon (Sharon Case) for reluctantly going along. Case’s character also has knowingly been working at the police department, which surely should result in her losing that job, among other outcomes.

Reed (Tristan Lake Leabu) will need to realize that his grandmother, not Victor, is responsible for his father’s death. And, Mackenzie (Kelly Kruger) will have to tell J.T.’s two youngest children what’s happened.

All of the above feels likely to fully conclude within the next month-plus. That projects to an ending prior to St. Valentine’s Day. CDL is a leading source for everything linked to The Young and the Restless. Check back regularly for Y&R spoilers and news!