The Young and the Restless Spoilers: Friday, December 21 – Nick Fights for Family’s Safety – Temptation Hits for Sharon and Rey

BY Heather Hughes on December 19, 2018 | Comments: one comment
Related : Soap Opera, Spoiler, Television, The Young and the Restless 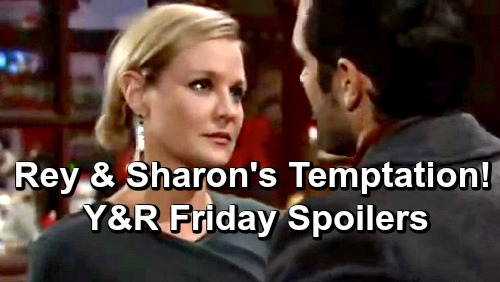 The Young and the Restless (Y&R) spoilers for Friday, December 21, tease that Nick (Joshua Morrow) will be on a mission to protect his family. He’ll vow to defend the Newman clan no matter what else life throws at them. That includes shielding his loved ones from Rey (Jordi Vilasuso) and his constant badgering. Rey won’t let up, but Nick will at least want to serve as a formidable foe.

Nick will naturally have Victor’s (Eric Braeden) disappearance and Nikki’s (Melody Thomas Scott) hit-and-run accident on his mind. He may ponder a possible connection and fear that there’s real trouble out there. Nick will want to step up and keep his family safe during this disturbing crisis. He’ll realize something even worse could be brewing, so he’ll try to be prepared.

Of course, Y&R fans know Reed (Tristan Lake Leabu) is to blame for running down Grandma Nikki. He’ll continue to keep that under wraps for now, so let’s talk about some other drama. Abby (Melissa Ordway) will likely still be miffed at her man. Arturo (Jason Canela) rushed to Mia’s (Noemi Gonzalez) defense recently, which didn’t go over well with Abby.

It’s understandable since Mia and Arturo have such a passionate, dangerous history together. Mia cheated on Rey with Arturo, who was her first real love. She’s also managed to put herself in Arturo’s orbit again lately, so Abby has every reason to be nervous.

Nevertheless, Arturo will do his best to ease Abby’s concerns. He’ll let down his walls somewhat and confide in his girlfriend on Friday. Abby appreciates when Arturo is willing to be vulnerable and honest with her, so this discussion could help them grow closer.

Speaking of growing closer, Rey and Sharon (Sharon Case) will do the same. They’ve been trying to dial down their attraction and pull back, but that plan’s about to fail. The Young and the Restless spoilers say some tender moments are on the way.

Sharon may open up about some struggles she’s dealing with. She can’t share any of her J.T. (Thad Luckinbill) worries, but she might admit she’s fretting about Nick and everything he’s going through with Nikki. Sharon might mention some of the issues she’s having with Mariah (Camryn Grimes), too. She’s still having a hard time accepting Mariah’s decision to get back together with Tessa (Cait Fairbanks).

This might be a good opportunity for Rey to talk about why he took Mia back after her betrayal. It could also spark a conversation about how you can’t help how you feel about someone. In that case, Rey would be referring to Sharon! He hasn’t been able to turn off his feelings for her and that probably means another blow to his marriage is brewing.