BY Kinsley Goldman on October 24, 2018 | Comments: one comment
Related : Soap Opera, Spoiler, Television, The Young and the Restless 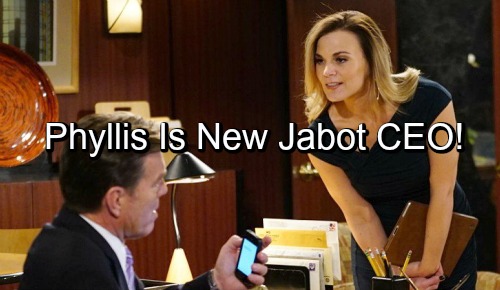 The Young and the Restless (Y&R) spoilers tease that another shakeup’s brewing at Jabot. The company’s been playing musical chairs with that CEO seat for a while now, but it looks like the game will continue. Ashley’s (Eileen Davidson) already been knocked off the throne and will be leaving town next week – October 29 is Eileen Davidson’s final Y&R airdate.

As for Jack (Peter Bergman), it looks like he’ll take a step back and reevaluate his choices. It was pretty cutthroat of Jack to destroy Ashley’s secret contract. Ashley was wrong to deceive Jack about his biological father, but it’s easy to see why she was pushed to the edge. She was indeed treated like a second-class Abbott due to her own paternity.

If blood didn’t matter to Jack, he wouldn’t have had such an outraged reaction to Ashley’s deception. He basically proved her point. Jack also showed his ruthless side by putting that document in the shredder. There are more important things in life than the CEO spot, so Jack may choose to focus on Dark Horse. He’s really been helping Nick (Joshua Morrow) get the company off the ground anyway.

The Young and the Restless spoilers say Traci’s (Beth Maitland) latest stint will also wrap up soon. She doesn’t have the skills necessary to be a CEO option for long. Next week, Billy will make a power play. He’ll apparently think a week of rehab makes up for embezzling $500,000 from his family’s company.

Something tells us that’s not going to work out. There’s a good chance Billy’s attempt to reclaim the throne will flop. All these CEO candidates are dropping like flies, so who’s going to be left? Y&R may go with a surprising choice. Now that the blood-Abbott clause has been eliminated, it opens the door for Phyllis (Gina Tognoni) to step up.

Y&R buzz has it Phyllis will score the powerful position in early November. If so, she’ll no doubt have Jack’s full support. He loves and trusts Phyllis enough to take the lead. If Billy sticks around in a lesser role at Jabot, the ex he targeted will be his boss! That could certainly bring some tension at the office.