BY Heather Hughes on October 23, 2018 | Comments: one comment
Related : Soap Opera, Spoiler, Television, The Young and the Restless 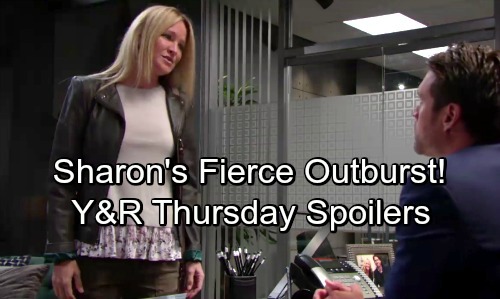 The Young and the Restless (Y&R) spoilers for Thursday, October 25, tease that Sharon (Sharon Case) will get fed up with Nick (Joshua Morrow). She’s told him repeatedly that they’re over for good, but she’s still waiting for him to move on. Instead, Nick’s busy chasing Sharon around town and threatening Rey (Jordi Vilasuso).

If Rey gives Sharon the heads-up on that, she’ll be even angrier with her ex. Regardless, Sharon will decide she apparently hasn’t made herself clear. She’ll march over to Nick’s office at Dark Horse and get ready for a showdown. Sharon will insist that she can be friends with anybody she likes, so Nick should just butt out. She won’t think it’s any of his business who she chooses to spend her time with.

Other Young and the Restless spoilers say Billy (Jason Thompson) will wrestle with his emotions. He still has no remorse over the pain he’s caused. Billy’s too focused on how much he’s been hurt by others, so he’ll want to do some venting on Thursday’s new Y&R episode, October 25.

Fortunately, Victoria (Amelia Heinle) will be there to listen. Billy will share how he’s feeling and get some support from his former flame. If this keeps up, perhaps Victoria won’t be his former flame for long. They’re both single, so Y&R could easily start inching them back in each other’s direction.

Whatever the case, Victoria and Billy will share some nice moments. Although Victoria has more important matters to deal with, she should appreciate the distraction. Victoria could use a break from all the blackmail and cover-up drama.

Other Young and the Restless spoilers say Abby (Melissa Ordway) will get curious. She recently agreed to help Nick by digging around a bit. Abby wouldn’t mind learning more about the Rosales family anyway, so she’ll fish for info about Arturo’s (Jason Canela) past with Rey.

Naturally, Arturo will stonewall Abby and hope she drops the matter. His behavior will leave Abby suspicious and determined to find out the truth. The Young and the Restless spoilers hint that buried secrets will be uncovered down the road.

What are the Rosales brothers hiding and why? Y&R fans will be anxious to hear all the juicy details! We’ll give you updates as other news comes in. Stay tuned to the CBS soap and don’t forget to check CDL often for the latest Young and the Restless spoilers, updates, and news.