The Young and the Restless Spoilers: Comings and Goings – An Emotional Farewell and a Troubling Return – New Character Shakes Up GC 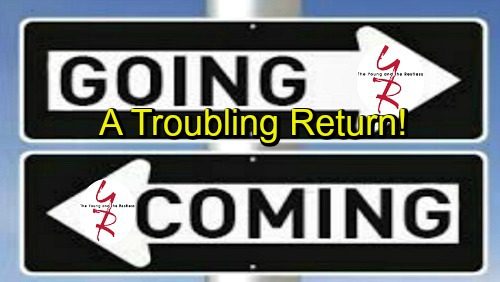 The Young and the Restless (Y&R) spoilers tease that we’ve got some comings and goings news to share. For starters, we should mention a tough goodbye. Y&R fans have known about Eileen Davidson’s (Ashley) exit for a while now, but it’s finally becoming real. Ashley will leave Genoa City behind on Monday, October 29.

This sendoff will be bittersweet since Ashley’s heading down an exciting new path. She’s taking charge of her own life and starting a new company in Paris. That’s the sweet part! The bitter part comes in through the family tension. Ashley will manage to patch things up with Jack (Peter Bergman) for the most part, but it’ll still sting when she takes all her patents and abandons Jabot.

Of course, Ashley will abandon her new romance with Neil (Kristoff St. John) as well. She’ll admit that she’ll have to wonder what might’ve been. On the bright side, Neil’s got a jet and can fly to Paris anytime he wants. He’s probably not interested in a long-distance relationship, but hey – maybe they could still be bedroom buddies when the mood strikes!

Other Young and the Restless spoilers say Jill (Jess Walton) will make a comeback this week. She’ll blow back into town on her broom just in time for Halloween. Nikki (Melody Thomas Scott) won’t be happy when Jill causes trouble. They might spar over that ugly sculpture in Chancellor Park, which will have to be removed temporarily. A water leak will force repairs, so the cover-up crew will face drama.

Victoria (Amelia Heinle), Sharon (Sharon Case), Phyllis (Gina Tognoni) and Nikki will form a plan of attack. They’ll decide to move J.T.’s (Thad Luckinbill) body to prevent exposure, but a huge shocker awaits. It looks like an unexpected snooper may join them at the burial site.

A new character will also make her debut this week. Alice Hunter will show up as Kerry Johnson on October 31. Jabot will waste no time in replacing Ashley and her talents. Jack will make sure the company survives and thrives, so Kerry the scientist and executive will pitch in.