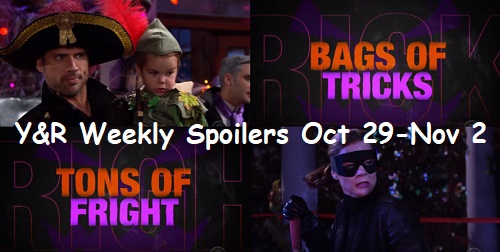 The Young and the Restless (Y&R) spoilers for the week of October 29-November 2 tease that we’ll see some bad news and plenty of surprises. For starters, Ashley (Eileen Davidson) will stand her ground on leaving town. Jack (Peter Bergman) will come to his senses and offer a heartfelt apology, but Ash will insist that it’s too late for that. She’ll be determined to walk away with all her patents and products.

Ashley will catch the next flight to Paris and start her own cosmetics company. She’ll certainly have the skills and successful lines to make it happen. As for Jack, he’ll have to tackle the family destruction. The Abbott clan will be a mess after all this, but Jack will step up and hope they can come together again.

Jabot will get some assistance from Kerry Johnson (Alice Hunter), a new scientist and exec. Phyllis (Gina Tognoni) will also throw her hat in the CEO ring. Since none of the Abbotts are worthy right now, Phyllis might be just what this company needs. Over with Lauren (Tracey E. Bregman), she’ll get an intriguing invitation. Someone from her past will reach out, so this should kick off a new storyline.

Of course, Halloween is also coming up this week. Y&R spoilers say Nick (Joshua Morrow) will try to use it to his advantage. Sharon (Sharon Case) is connected to Nick through Faith (Alyvia Alyn Lind) and Christian (Jude and Ozzy McGuigen). He’ll hope they can bond over the kids, which will be fine with Sharon. It’s the romantic reunion she’ll continue to have a problem with.

The Young and the Restless will head to the pumpkin patch at some point. Rey (Jordi Vilasuso), Lola (Sasha Calle), Mariah (Camryn Grimes) and Tessa (Cait Fairbanks) will join the kids for some fall fun. Later, a Halloween party will get underway. That should bring some great costumes and warm moments for all the guests.

Unfortunately, the cover-up crew will be busy tackling a J.T. (Thad Luckinbill) issue. After a water leak emerges, Nikki (Melody Thomas Scott) and the others will decide to dig up J.T.’s corpse. Victoria (Amelia Heinle) will be spooked by the idea, but Phyllis, Sharon and Nikki will manage to talk her into it.

The Young and the Restless spoilers say these ladies will face a crazy twist at the burial site. It’s all building to another stunning discovery, which Victoria will make by the end of the week. The girls’ night gang should be in full-blown panic mode soon!

Y&R still has plenty of mysteries to explore, so don’t miss all the action. We’ll give you updates as other details emerge. Stay tuned to the CBS soap and don’t forget to check CDL often for the latest Young and the Restless spoilers, updates, and news.