BY Heather Hughes on October 26, 2018 | Comments: one comment
Related : Soap Opera, Spoiler, Television, The Young and the Restless 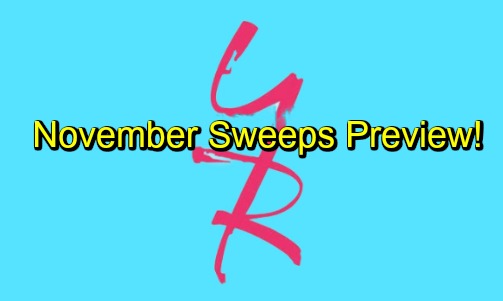 The Young and the Restless (Y&R) spoilers tease that some shockers and shakeups are ahead. November sweeps is almost upon us and that means it’s time for some hot drama. We’ve got a great preview for you, so let’s take a look at what to expect.

For starters, the Abbotts will try to get their act together. This family has been in crisis mode for what feels like forever! Ashley’s (Eileen Davidson) departure will leave a void at Jabot, but a new face could help out with that. Kerry Johnson (Alice Hunter) will make her debut as a scientist and executive who comes through for the company. She’ll pitch in as Jabot heads down a new path.

As part of that new path, Phyllis (Gina Tognoni) will push herself as a CEO candidate. It appears she’ll score the spot, which should cause conflict with Billy (Jason Thompson). That’ll add to Phyllis’ pain, but she’ll seek comfort from a familiar source. Nick (Joshua Morrow) will struggle to let Sharon (Sharon Case) go, but that won’t stop him from pursuing a steamy and risky romance with Phyllis.

Jack (Peter Bergman) will also have love on his mind. His lonely heart could really use someone special and he just might find her. Will Jack hit it off with a new character or perhaps face a blast from the past? Either way, Jack will keep himself busy over the next few weeks.

Other Young and the Restless spoilers say Abby (Melissa Ordway) will be inspired. She’ll thrive while working with Nick at Dark Horse, so that’ll be a real confidence booster. Abby will take on a new project, but her relationship with Arturo (Jason Canela) could falter. She’ll learn a startling secret that may change her perception of the handsome Rosales.

Mariah (Camryn Grimes) will find herself in a similar situation with the always cagey Tessa (Cait Fairbanks). Their romance will take a huge leap forward when they decide to move in together, but it’ll lurch backward just as quickly. Close quarters will bring a new revelation and plenty of conflict.

Of course, we can’t forget about the cover-up crew. Y&R spoilers say unforeseen circumstances will force them to make a bold move. Phyllis, Sharon, Victoria (Amelia Heinle) and Nikki (Melody Thomas Scott) will make plans to move J.T.’s (Thad Luckinbill) body. An unexpected twist will leave them reeling, so their scheme may take a wrong turn.

It sounds like J.T.’s corpse may not be where they left it. Did someone already move the body or could J.T. still be alive? The former seems more likely, but anything’s possible on The Young and the Restless! As for the blackmail drama, the person behind the threat will finally be revealed. After the truth comes out, a fuming Victoria will become the gang’s fierce leader.

Over with Devon (Bryton James), his heart will start to heal thanks to someone in his history. Lauren (Tracey E. Bregman) and Michael (Christian LeBlanc) will also encounter somebody from the past. He or she will turn their lives upside down, so we’ll see how they handle it.

Rey (Jordi Vilasuso) will get closer to Sharon, but what happens once his estranged wife shows up? Mia (Noemi Gonzalez) will definitely cause a few problems. The same goes for Summer (Hunter King) as she meddles in Kyle (Michael Mealor) and Lola’s (Sasha Calle) budding relationship.

That’s it for your November sweeps preview! We’ll give you updates as other Y&R news comes in. Stay tuned to the CBS soap and don’t forget to check CDL often for the latest Young and the Restless spoilers, updates and news.