BY Heather Hughes on October 24, 2018 | Comments: one comment
Related : Soap Opera, Spoiler, Television, The Young and the Restless 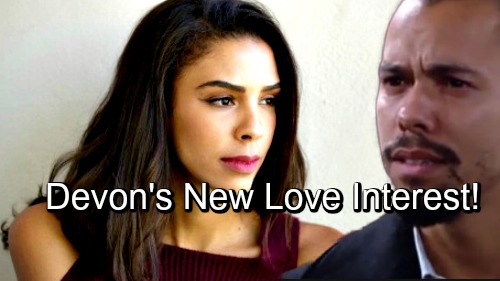 The Young and the Restless (Y&R) spoilers tease that Devon (Bryton James) could be headed for a breakthrough. He’s been stuck against a wall of grief ever since Hilary’s (Mishael Morgan) death, but he’s got to tear that down eventually. Y&R fans certainly understand Devon’s pain, but he can’t stay in mourning mode forever. At some point, Devon will have to heal his heart and open it up to love again.

Of course, soaps tend to reach that point faster. In real life, it might take someone years to truly move on. Viewers would get bored if Y&R went that route, so they should opt for something quicker here. However, that doesn’t mean it’ll be instant love. Devon will still have to navigate a tricky road and avoid some pitfalls along the way. The important thing is he’ll be doing less moping and more living.

The Young and the Restless spoilers say Alice Hunter will make her debut soon. She’ll show up as Kerry Johnson on October 31. The character was originally going to be called Kerry Jones, but Y&R decided to switch it up. Kerry is a scientist and executive who’ll lend her skills to Jabot. She’ll be hired right after Ashley leaves, so they’ll obviously appreciate extra help.

Kerry will settle right in and make herself at home in Genoa City. She’ll thrive in her new job, but what about her personal life? Kerry won’t be in any hurry to find a man, but she just might score one anyway! Both Nate (Brooks Darnell) and Devon are single, so Y&R could turn this into a love triangle.

However, Devon’s probably the one fans are rooting for. He deserves some happiness after everything he’s been through. As for Hunter and her new role, she’s excited to be tackling this challenge. In an interview with Soap Opera Digest, Hunter talked about how grateful she was to get the part.

“Being on America’s No. 1 soap isn’t a bad way to start a soap career,” Hunter said. “I’m thrilled!” Hunter also offered some hints about her character. She suggested that Kerry’s very put together on the outside, but a bit of a mess on the inside. It sounds like Kerry and Devon would be the perfect match. He’s been a mess on the inside lately, too.

Getting to watch @ginatognoni work for the last month on @YandR_CBS has been a masterclass. ❤️ Phyllis is one of the most dynamic, layered characters on TV! https://t.co/Wi0GoqnB7Z