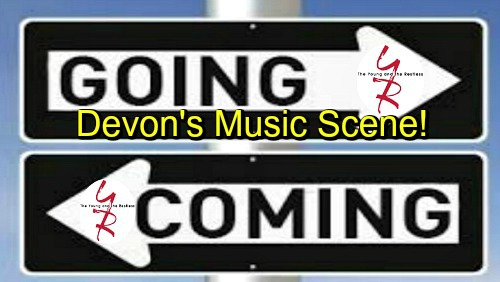 The Young and the Restless (Y&R) spoilers tease that we’ve got some comings and goings news to share. First, let’s talk about a debut happening this week, November 12-16. Noemi Gonzalez arrived as Mia, Rey’s (Jordi Vilasuso) estranged wife. It turns out she wants to drop the estranged part and make amends, but things will get messy thanks to Rey’s bond with Sharon (Sharon Case).

Looking ahead a bit, Devon’s (Bryton James) sister is headed to town. Loren Lott has been cast in the role of Ana Hamilton. She was an American Idol finalist on season 14, so it sounds like Devon may add a recording artist to his streaming label. He might as well help Ana make it big! It’ll give Devon something to do besides mope around.

The Young and the Restless spoilers say Devon will indeed pep up thanks to Ana, who’ll show up starting November 28. The show has also put out a casting call for “Timothy,” who’s musically inclined. Soap Opera Digest stated that “Timothy” would be a “wannabe rock star dude who makes ends meet by waiting tables till he gets his break.” Perhaps Devon could come through for him, too.

Meanwhile, Y&R continues to waste the talented Cait Fairbanks’ (Tessa) pipes. Tessa understandably lost her streaming deal after stealing Mariah’s (Camryn Grimes) journal and turning it into a plagiarized song. She also left her job as an assistant rather abruptly, so Devon’s naturally got some trust issues.

Still, Devon did say that maybe – just maybe – Tessa could get back in the recording studio one day. Will that day finally come? It probably depends on Tessa’s explanation for all that cash and how she handles the mess, but we hope it works out. In real life, Fairbanks will be releasing new music under the moniker “Ginesse” starting November 16 – so you can hear some fresh tunes from her either way.

Other Young and the Restless spoilers say a new Fenmore Baldwin is coming to Genoa City. Zach Tinker will take over for Max Ehrich when Fen comes home for the holidays. He’ll undoubtedly have some surprises in store for Lauren (Tracey E. Bregman) and Michael (Christian LeBlanc).

Finally, there’s some Y&R alum news to pass along. Miles Gaston Villanueva (ex-Luca) has scored the part of Dr. Alec Shaw on Fox’s The Resident. If you’re missing Luca on The Young and the Restless, you might want to check out Villanueva in this recurring role as a doc.

That’s it for comings and goings! We’ll give you updates as other Y&R details emerge. Stay tuned to the CBS soap and don’t forget to check CDL often for the latest Young and the Restless spoilers, updates and news.