The Young and the Restless Spoilers: Devon’s Last-Minute Change of Heart Brings Courtroom Shocker – Hilary Would Want Mercy for Lily

BY Marcy Cohen on August 7, 2018 | Comments: one comment
Related : Soap Opera, Spoiler, Television, The Young and the Restless 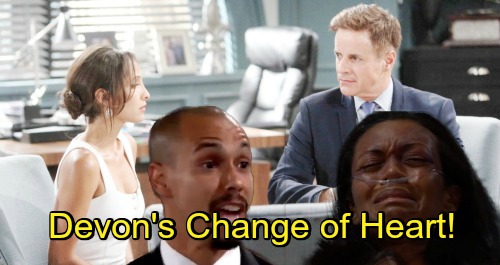 The Young and the Restless (Y&R) spoilers tease that Devon’s (Bryton James) rage will continue to build. Thanks to Lily’s (Christel Khalil) irresponsible driving, Devon no longer has a family. Hilary (Mishael Morgan) and her baby were suddenly taken from him, so Devon’s craving vengeance.

In Tuesday’s Y&R episode, August 7, Michael (Christian LeBlanc) warns Lily about her potential fate. Two counts of vehicular homicide could earn Lily up to 20 years in the state pen. That’s not how Lily would like to spend the next two decades, so she’ll be concerned about her future.

Of course, the judge’s verdict won’t just affect Lily. Neil (Kristoff St. John), Cane (Daniel Goddard), Mattie (Lexie Stevenson) and Charlie (Noah Alexander Gerry) will all prepare for the worst. The Young and the Restless spoilers say Cane will be particularly distraught as Lily’s hearing draws near. He’ll lash out at Devon for guilt-tripping Lily into turning herself in.

However, Devon will believe Lily deserves her guilt and so much more. Y&R spoilers reveal that he’ll vow to push for the maximum sentence and hope that she rots behind bars. Devon has no use for Lily at this point. He just wants her to suffer and taking her away from her family would certainly achieve that goal.

Devon’s pain and anger are really taking a toll on him right now. He’s caught up in his revenge mission, but he may have a change of heart eventually. If Devon really stopped to think about this, he’d realize this isn’t what Hilary would’ve wanted.

Hilary had plenty of problems with Lily, but she made peace with her in the end. The red-light detail probably wouldn’t have changed anything for Hil.

Hilary wasn’t always the easiest person to get along with and she knew that. As her death drew near, The Young and the Restless writers saw to it that any lingering hostility melted away. Hilary had already been mellowing thanks to her pregnancy, so it wasn’t quite out of the blue.

Bottom line, Hilary wasn’t the same person she used to be. She had changed for the better by the time she took her last breath. Hilary wouldn’t like the idea of turning Lily’s life upside down.

What good will it do? Hilary desperately wanted to be a mom, so she would hate knowing that her demise led to suffering for Charlie, Mattie and Sam.

Will Devon ultimately come to his sense? Could he change his mind at the last second and urge the judge to have mercy on Lily? The Young and the Restless will have to find some way to get Lily off the hook! Even if she does a little prison time, Lily definitely won’t be stuck in there for 20 years.