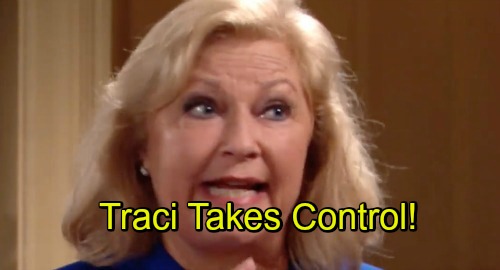 The Young and the Restless (Y&R) spoilers reveal Dina Mergeron (Marla Adams) produces documents that protect Ashley Abbott (Eileen Davidson) from everything Jack Abbott (Peter Bergman) had ever done to her and Jabot; but the only person who knew about them is Kyle Abbott (Michael Mealor), and he was keen on destroying them, until his dad walked in!

Jack Does The Unthinkable!

John Abbott (Jerry Douglas) made the document, long before he died to ensure Ashley and her creations were safe from Jack. Kyle sees the document and his grandfather’s signature, but hopes that Dina’s Alzheimer’s will make her forget they had been there – but she is smarter than he thinks.

The Young and the Restless spoilers tell us that Dina catches him attempting to shred the papers and panics, just as Jack comes in. Jack reads them, and knowing how much chaos those papers would bring, agrees with Kyle and shreds them; in spite of how much he loved and respected his father.

The Young and the Restless spoilers tease that a distraught Dina tells everything to youngest daughter, Traci Abbott (Beth Maitland) who retrieves everything from Jabot and puts the shredded document back together. Traci realizes how much of an impact this piece of paper represents on Jabot but it was what her father wanted.

Y&R buzz teases that Traci is extremely hurt by what Kyle and Jack did and how low they would stoop to make sure it was destroyed.

Traci returns to the Abbott mansion and calls the family together, presenting every piece of information she has gathered – determined for the Abbott family to find a resolution to the massive fracture they are dealing with right now.

Traci wants them to remember who the Abbotts were and who their father would want them to be. Will Traci be the one who can reunite their dysfunctional family and fix everything at Jabot that her siblings have destroyed? Is it possible that Traci can bring the family together in time for Ashley’s Y&R exit?

Be sure to tune into CBS’ The Young and the Restless (Y&R) to catch up on everything happening in Genoa City and do not miss out on all the Abbott family drama! Check Soap Opera Spy often for updates, news, rumors and spoilers! Read more CDL news, spoilers, and recaps on our The Young & The Restless homepage