The Young and the Restless Spoilers: Ashley’s Final Victory Over Jack – Farewell To the Great Eileen Davidson

BY Sean O'Brien on October 21, 2018 | Comments: one comment
Related : Soap Opera, Spoiler, Television, The Young and the Restless 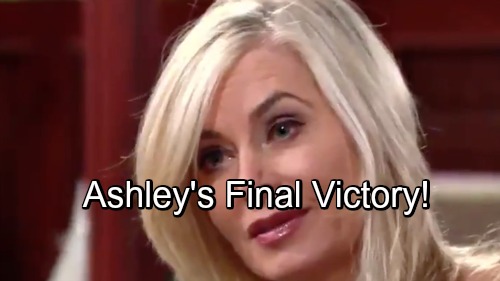 The Young and the Restless spoilers tease that Ashley (Eileen Davidson) appears likely to leave Genoa City on an upbeat note after all. Dina’s (Marla Adams) memory proved spot on this time, as Kyle (Michael Mealor) found a stunning legal document in the Jabot safe.

John (Jerry Douglas) and Dina created a gift for Ashley many years ago. They opted to give her full control over Jabot’s patents as an enduring gift, which is still in effect.

It’s natural that Kyle wants to destroy these documents. But his grandmother walked into the office just before he shredded them, which seemingly preserves Davidson’s ability to have left the show with Ashley’s head held high.

Y&R viewers know that Davidson will last be seen on-screen, at least within her regular contract status, at the end of the current month. However, Ashley’s pre-Halloween departure probably won’t see her fly on a broom out of town.

Miss Abbott is no witch. Instead, as she and Victoria (Amelia Heinle) were discussing at Crimson Lights, Ashley was simply responding to a sibling rivalry with her brother, Jack (Peter Bergman), just as Vickie has needed to prove herself in comparison to Nick (Joshua Morrow) through the years.

Ashley’s stance is that she isn’t remorseful for having stripped Jack of his paternity, before it was recently given back. Clearly that’s a misguided view of morality. But it must be said that Jack has done many things that are equally as bad, if not worse, to her and others through the years.

This non-Abbott child is arguing that Jack’s duplicity isn’t called out, but hers is. If both Ashley and Jack come across as selfish, it’s because they are. And then there is Kyle, who was trying to destroy evidence of his deceased grandfather’s and currently Alzheimer’s affected grandmother’s wishes. Yes, Mealor’s character is very much like his father and his aunt.

Assuming that Ashley gains knowledge of John and Dina’s directive, she will then hold permanent and very real leverage within Jabot for the rest of her life. That will not make the seeming soon-to-be-again head of Jabot, meaning Jack, happy. Instead, he’ll be put on equal footing with his sister as long as he remains in their father’s chair.

This projected storyline ender for Ashley is delicious soap. All the best is wished to one of Y&R’s great actors as she explores the next scenes in her real life. Surely, it would also be nice to see Davidson reprise as Ashley again in the future, even if that’s only on a recurring basis.