The Young and the Restless Spoilers: Eileen Davidson Shuts Down Mal Young’s Claims – Sets the Record Straight About Y&R Departure

BY Heather Hughes on September 29, 2018 | Comments: one comment
Related : Soap Opera, Spoiler, Television, The Young and the Restless 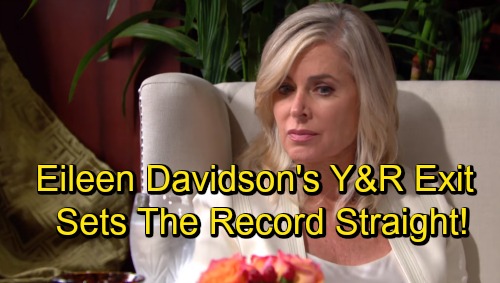 The Young and the Restless (Y&R) spoilers reveal that Eileen Davidson’s (Ashley) speaking out on her status at the CBS soap. There’s been plenty of confusion about Ashley’s (Eileen Davidson) exit and how involved she’ll be with Y&R after she hits the road. Davidson recently posted a bittersweet video on Instagram about her time at Y&R. It really felt like a final farewell.

That’s why Young and the Restless fans were excited by a new interview in Soap Opera Digest. Mal Young, Y&R’s head writer and executive producer, assured viewers that this wasn’t the end. “Eileen is still a part of our family, so this is just a little time-out,” Young said. He stated that he had an agreement with Davidson regarding her future with the show.

Young added, “Ashley will be dropping in from time to time and there’ll be a moment in the future when she’ll be back and we’re doing a big new story with her.” He concluded by suggesting that goodbyes were sad, but not to fret since this isn’t one. Young was clear about Ashley remaining a “massive part of the show.”

However, Davidson told a very different story on Twitter! After a fan posted the article and tagged her, Davidson felt the need to set the record straight. She didn’t want to mislead viewers about how much they’d be seeing Ashley – or if they’d even see her at all.

Davidson tweeted, “Hey guys! Thanks for your support but I left y and r last week. I’m not taking a “break.” I did say I would be open to coming back for a party or something possibly down the line. Just want to clarify!!! Enjoy my last several shows! The story is fantastic!”

After Davidson offered that reply, she sent the same statement to The Young and the Restless’ Twitter account. Although Davidson had good things to say about her exit storyline, it’s easy to see she’s calling out Young for his lies. Davidson obviously considers this a goodbye from the show. Being open to “possibly” coming back for an event does NOT mean she’s signed on for some huge story.

Davidson seemingly isn’t afraid of burning bridges, so that says a lot about her confidence in her decision to leave. It also adds to the growing list of unhappy campers behind the scenes. Many cast members seem fed up with Young’s direction for the show and his treatment of Y&R vets.

The Young and the Restless spoilers say Ashley’s departure will bring some terrific scenes, so enjoy them while you can. According to Davidson, this is pretty much all she has in mind for Ashley’s future at Y&R. We’ll give you updates as other news comes in. Stay tuned to the CBS soap and don’t forget to check CDL often for the latest Young and the Restless spoilers, updates and news.