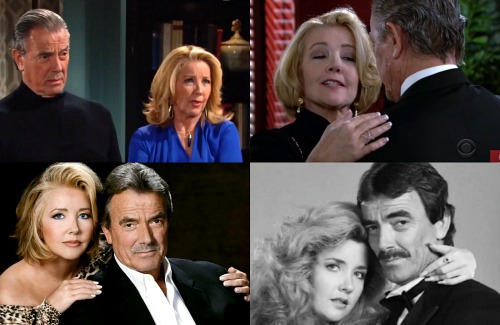 The Young and the Restless (Y&R) spoilers tease that Victor (Eric Braeden) and Nikki (Melody Thomas Scott) have more drama headed their way. Thanks to J.T.’s (Thad Luckinbell) vicious attack, Victor’s still stuck in the hospital. He’s got a long recovery ahead of him, but at least this will bring Nikki closer to her husband and maybe out of Arturo’s bed. It’s time for these two to start acting like a real couple again.

Fortunately, their portrayers are on great terms. Braden and Scott have worked together for years, so they recently sat down for a joint Facebook live chat. Y&R wanted to let them spill some shockers and secrets as the show’s celebratory week continues.

The Young and the Restless is in the midst of its 45th anniversary episodes, so Scott and Braeden were asked if they ever thought Y&R would make it this far. “Never,” said Scott. She added that if the show’s around for another 45 years, they’re “gonna be in wheelchairs, baby – at best!”

Another fan wanted to learn more about when Braeden and Scott first met, but that left the duo scratching their heads. They’ve been working as a team for so long, they can’t even recall their first meeting! Scott guessed that they must’ve ran into each other on set at some point.

Braeden suggested that it may have taken a while since their storylines weren’t connected at first. He offered some info about life on a soap set. “What people don’t understand about the soap business is that we don’t really see each other much in between scenes,” Braeden said. Scott added that it was easy to go for long periods of time without seeing many of her costars.

Luckily, Scott and Braeden get plenty of scenes together now. Nikki and Victor have faced their fair share of ups and downs. They’ve also had several beautiful weddings. When asked which one was their favorite, the onscreen partners dropped a bomb. It turns out they hate filming them. They confessed that they’re a real pain since there’s a lot of waiting around.

Scott indicated that the same goes for big party scenes. The cast can get a little cranky when they have to shoot those. However, there are definitely some things Scott and Braeden like to film. Scott noted that she loves Nikki’s catfights with Sharon (Sharon Case).

Braeden pointed out that the conflict between Nikki and Victor is fun, too. He doesn’t like it when they’re hostile, but the arguments are entertaining. All the drama is necessary on The Young and the Restless. Braeden mentioned that the current storylines are “very interesting” and suggested that things are only going to get better in the coming months.