BY hellodrdavis on August 2, 2018 | Comments: one comment
Related : Soap Opera, Spoiler, Television, The Young and the Restless 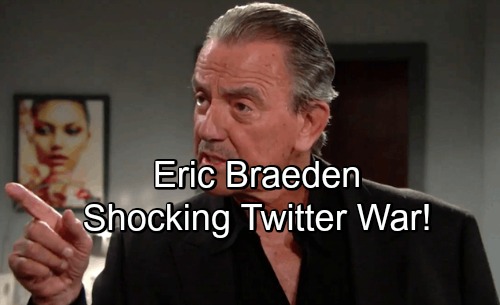 The Young and the Restless star Eric Braeden had a high drama moment off the set this past week. As many Y&R fans know, Eric is active on Twitter and frequently shares what he’s doing and voices his opinions on various matters. It’s great that fans can interact with the soap star directly via this medium, and most fans have cordial back-and-forth conversations with him.

But things got a bit ugly when a troll named Mike decided to berate and threaten Eric on Twitter. The subject of Mike’s tweet was a bit cryptic, but it was clear that the message was negative and that a threat was being made. The rambling tweet began as being from “your friend” and ended with “so be very careful.”

Of course, soap stars are often the subject of criticism and sometimes threats when their characters do things that fans don’t like. Although it seems difficult to comprehend, some viewers don’t see any distinction between actors and the characters they portray. Could this be the case with this particular tweet against Eric? It’s difficult to say for sure, but it could be a possibility.

According to reports, some fans have been upset by Victor’s actions on the show toward his son Nick (Joshua Morrow). Victor sought and won temporary custody of Christian (Jude and Ozzy McGuigen), which many fans thought was outrageous and unforgivable. Or this troll could have been upset with Victor for any number of other devious actions the character has taken.

At any rate, Eric didn’t appreciate the troll’s threatening words against him and decided to respond. Eric fired back, “Mike, you’re threatening me and therefore you are NOT my friend, get it?? My people are watching your a**. So WATCH IT!!! Get my drift?? I don’t take kindly to threats!! I’m from the f***ing streets, brother, experienced more hardships than you’ll ever, SO DON’T threaten!!!!”

Eric’s clearly not one to back down from a fight. Of course, whether Eric’s words will squash this particular troll permanently remains to be seen. But Eric definitely made his point and it may prevent further attacks by others who follow his Twitter feed.

Do you think Eric’s response to this troll was justified? Stick with the CBS soap and don’t forget to check CDL often for the latest Young and the Restless spoilers, updates, and news.