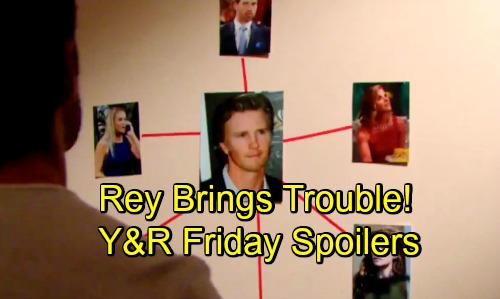 The Young and the Restless (Y&R) spoilers for Friday, August 17, tease that fans will get their first glimpse of the mysterious Rey (Jordi Vilasuso). When he first appears on screen, Rey will be examining an evidence board. J.T. (Thad Luckinbill) will be at the center of it, so Rey will obviously be trying to solve the case of his disappearance.

Most of Genoa City assumed that J.T. had gone on the run, but Nick’s (Joshua Morrow) impersonation plot must’ve stirred up questions. He may have inadvertently drawn more suspicion and revved up Rey’s desire to seek the truth. Thanks to Scott’s (Daniel Hall) shocking article, some GC residents are pointing the finger at Victor (Eric Braeden). It’d be easy for him to make J.T. disappear.

Of course, Y&R viewers know Nikki (Melody Thomas Scott) killed J.T. to protect Victoria (Amelia Heinle). She covered it up with help from her daughter as well as Sharon (Sharon Case) and Phyllis (Gina Tognoni). Rey will definitely consider Victor a suspect, but he’ll be looking closely at Nikki, too. It probably won’t be long until he uncovers a crucial hint.

The Young and the Restless spoilers say Rey will put his investigative skills to good use. He’ll work on some other cases once he’s in town, so it should be interesting to see what he finds out. In the meantime, Ashley (Eileen Davidson) will lean on Neil (Kristoff St. John). He’s been dealing with a lot of family drama, but Ash will have some problems of her own.

Neil will be glad to have a new distraction. As he supports Ashley, things will eventually take a romantic turn. These two won’t be able to stick with friendship after all, so expect some hot scenes. Over with Nick (Joshua Morrow), he’ll await Summer’s (Hunter King) decision. After making a substantial offer on Thursday, Nick will want to know what Summer thinks in Friday’s episode.

Summer wants to blab to Billy (Jason Thompson), but she won’t be able to pass up a check that huge. She’ll take the money in exchange for her silence, but will she truly keep her end of the bargain? We’ll give you updates as other Young and the Restless news comes in. Stay tuned to Y&R and don’t forget to check CDL often for the latest Young and the Restless spoilers, updates, and news.