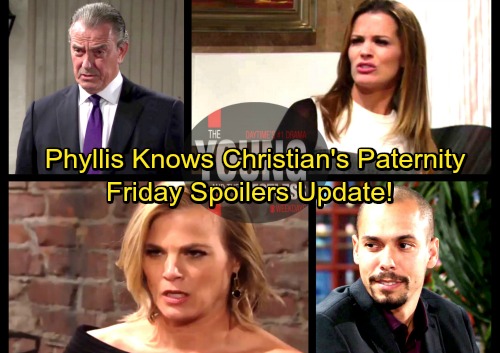 The Young and the Restless (Y&R) spoilers for Friday, February 16, tease that Nick (Joshua Morrow) and Chelsea’s (Melissa Claire Egan) engagement will move forward. After Nick gives Chelsea a ring, they’ll wonder if they’ll steal the spotlight from Noah (Robert Adamson). He’s got a big announcement to make, so they’ll decide not to flaunt their big news.

Later, Chelsea and Nick show up at Top of the Tower. Victoria (Amelia Heinle), J.T. (Thad Luckinbell) and Mariah (Camryn Grimes) won’t be able to make it, but Noah will give everyone else updates. The Young and the Restless spoilers state that Noah’s taking a Newman position in Mumbai.

Sharon (Sharon Case) and Nick will offer reasons why this isn’t a good idea, but Noah won’t back down. Victor (Eric Braeden) will argue that Noah has a bright future ahead of him. Across town, Billy (Jason Thompson) will convince Phyllis (Gina Tognoni) to hear Chelsea out before she does anything drastic. When Phyllis finds out where Chelsea is, she’ll get Billy to crash the party with her.

Back at Top of the Tower, Chelsea’s engagement ring will draw attention. Nick will decide they should come clean. They’ll make the announcement since the cat’s out of the bag anyway. Chelsea will add that they plan to adopt each other’s sons so they can be true brothers.

Sharon will pull Chelsea aside for a private chat. She’ll be confused since Chelsea has seemed so stuck on Adam (Justin Hartley) lately. The Young and the Restless spoilers say Chelsea will assure Sharon that this is what she wants.

Afterward, Chelsea will let Victor know that she’s not afraid of him. She’ll warn that there’s nothing he can do about her upcoming wedding, but Victor will suggest she shouldn’t be so sure. Phyllis will eventually corner Chelsea and mention proof that J.T. came up with. She’ll agree to keep her mouth shut if Chelsea breaks up with Nick.

Chelsea won’t be on board with that. She’ll drop a major bomb on Phyllis in Friday’s episode. Y&R spoilers say Chelsea will admit that Christian (Jude and Ozzy McGuigen) is Adam’s son. She’ll point out that if Phyllis doesn’t back off, Nick could face total devastation.

At the athletic club, Hilary (Mishael Morgan) will meet with a sperm donor named Bryon (Damion Poitier). He’ll be handsome and even a bit charming at first, but he’ll soon head into sleazy territory. After Hilary decides Byron’s a jerk, she’ll complain to Devon (Bryton James). He’ll be confident that everything’s going to work out for her.

A little later, Devon will make a stunning discovery. He’ll find the recording that Hilary made of Juliet’s (Laur Allen) confession. Devon will get confirmation that Cane (Daniel Goddard) wasn’t guilty of sexual harassment and Hilary’s known for months. He’ll look disappointed about his ex’s huge secret.

It sounds like plenty of drama’s on the way. We’ll keep you posted as other Y&R details emerge. Stick with the CBS soap and don’t forget to check CDL often for the latest Young and the Restless spoilers, updates and news.