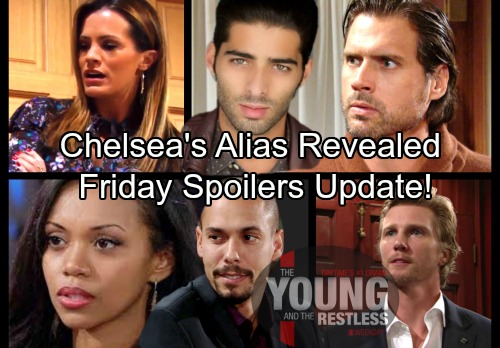 The Young and the Restless (Y&R) spoilers for Friday, February 2, tease that Hilary (Mishael Morgan) will clash with Devon (Bryton James). She’ll waltz in Hamilton-Winters and demand some office space. Hilary will be under the impression that an executive position is part of their deal. Devon will try to nix the idea, but Hilary won’t budge. They’ll have a heated argument over her power trip.

Meanwhile, Mariah (Camryn Grimes) and Tessa (Cait Fairbanks) will talk about Hilary’s drama. They’ll share some awkward moments before Devon and Hilary walk over. Once they exit, Tessa will dash off as well.

Mariah will be concerned when she spots Tessa’s sleeping bag and her box of stuff. Later, she’ll fish for info by asking where Tessa’s staying. Tessa will fib that she found a room available for rent. She’ll undoubtedly be embarrassed about camping out in the office.

Elsewhere, Devon will track down Hilary to seek answers about her behavior. She’ll note that she just had an appointment for a fertility treatment. Hilary will wish she was bringing this baby into the world another way.

Across town, Nikki (Melody Thomas Scott) will pay Reed (Tristan Lake Leabu) a visit. She’ll talk to him about showing some maturity before suggesting more guitar lessons. Since Tessa lost her record deal, she could use the extra cash.

Afterward, Nikki will find Nick (Joshua Morrow) sparring with a building contractor named Arturo (Jason Canela). She’ll intervene and send Nick away. Things will also get a bit heated between Arturo and Nikki, but they’ll eventually reach an agreement.

They’ll settle the matter at the athletic club, but Nikki will suggest that Arturo doesn’t have to leave yet. Once she grabs a room key, Arturo will head up to a suite with Nikki. Phyllis (Gina Tognoni) will look stunned when she spots them nearby. Cougar Nikki should enjoy her romp upstairs!

Other Y&R spoilers say J.T. (Thad Luckinbell) will find a name associated with the Chelsea (Melissa Claire Egan) 2.0 hacking. Alexandria West owns the website, but J.T. will warn that it’s an alias. Since he’s enjoying the challenge, J.T. will agree to keep looking into it.

Later, J.T. will meet up with Reed and they’ll play their guitars together. After J.T. teaches Reed a song, he’ll mention the case he’s working on. J.T. will keep digging until he finds a bank account tied to the alias. At the bank, a disguised Chelsea will pose as Ms. West. She’ll tell an employee that she’d like to withdraw all her money and close the account.

Back at home, J.T. will realize the bank account he discovered has just been shut down. He’ll get in his car and head to the bank right away. The Young and the Restless spoilers say the staff won’t be able to offer details, but J.T. will plan on obtaining the security footage.